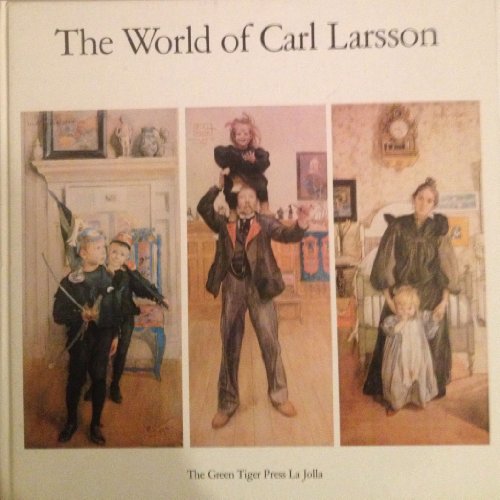 The World of Carl Larsson (A Star and Elephant Book)

Quantity: 1
View all  copies of this book
Buy Used
Price: US$ 8.00 Convert Currency
Shipping: US$ 4.25 Within U.S.A. Destination, rates & speeds
Add to basket

Title: The World of Carl Larsson (A Star and ...

Carl Larsson (1853 - 1919) was a Swedish painter representative of the Arts and Crafts Movement. His many paintings include oils, watercolors, and frescoes. He considered his finest work to be Midvinterblot (Midwinter Sacrifice), a large painting now displayed inside the Swedish National Museum of Fine Arts. After several years working as an illustrator of books, magazines, and newspapers, Larsson moved to Paris in 1877, where he spent several frustrating years as a hardworking artist without any success. Larsson was not eager to establish contact with the French progressive Impressionists; instead, along with other Swedish artists, he cut himself off from the radical movement of change. In 1882, he met fellow Swedish artist, Karin Bergöö, who soon became his wife. Her father gave them what became their family home, an old foundry at Sundborn, at Darlana, Sweden. They called it "Little Hyttnäs". Carl and Karin Larsson had 8 children. His family became Larsson's favorite models. Through his paintings and books, Little Hyttnäs has become one of the most famous artist's homes in the world, transmitting the artistic taste of its creators and making it a major line in Swedish interior design. The descendants of Carl and Karin Larsson now own this house and keep it open for tourists each summer. Larsson's popularity increased considerably with the development of colour reproduction technology in the 1890s, when the Swedish publisher Bonnier published books written and illustrated by Larsson and containing full colour reproductions of his watercolours. Larsson also drew several sequential picture stories, thus being one of the earliest Swedish comic creators. Carl Larsson considered his monumental works, such as his frescos in schools, museums and other public buildings, to be his most important works.