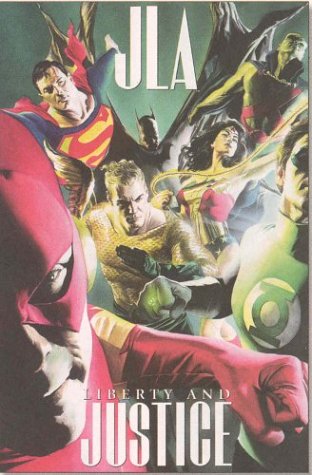 Presents the adventures of the Justice League of America as they save the world.

Artist Ross (Mythology) and longtime collaborating writer Dini (Batman: The Animated Series) render DC Comics' larger-than-life heroes in an oversized edition showcasing Ross's brilliantly painted, highly detailed artwork. The latest in an annual series of supersized books featuring DC's best-known characters, this work shows the ultimate superteam up against a real-world situation with a sci-fi twist. An alien virus threatens to wipe out Earth unless the Justice League of America can find a cure and prevent further infection. As the news gets out, the world panics and riots; now the heroes have to calm fears and quell nationwide hysteria, too. Although the JLA features the Big Three (Superman, Batman and Wonder Woman), lesser-known characters appear here too, such as J'onn J'onzz, the Martian Manhunter, The?Flash, Green Lantern and Aquaman. Each gets a chance to use his or her particular skills and confront the threat in his or her own way. Even though it's almost a guarantee the good guys are going to eventually win, Dini and Ross deliver a solid, entertaining story that will be particularly welcoming to newer readers. The star of the book, however, is Ross's breathtaking art. Each image looks like a photograph and bursts with life. The backgrounds and realistic characters have a curiously retro feeling, as if they've stepped off the pages of a Saturday Evening Post pictorial. Ross deftly makes the fantastical look real, whether it's whales ramming a Russian sub, a giant green fist grabbing a missile in mid-air or a man in a cape floating majestically in space.
Copyright © Reed Business Information, a division of Reed Elsevier Inc. All rights reserved.