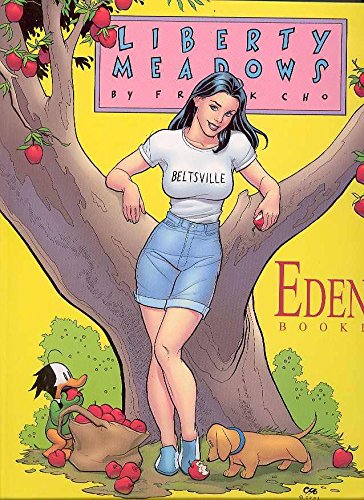 Image's first-ever newspaper strip book from award-winning cartoonist, Frank Cho. Liberty Meadows is an animal sanctuary where the animals run the show! There's Leslie, the hypochondriac bullfrog, Ralph the midget circus bear, Dean the male chauvanist pig (who really IS a pig), and the beautiful animal psychologist, Brandy, among others. Liberty Meadows is a bit Bloom County mixed with pop culture satire and sometimes (but never salacious) humor.

Frank Cho’s comic books sell out, issue after issue with early issues now in their 5th printings. His college comic strip collection, University: The Angry Years! is now rapidly selling through its 7th printing. He has won the Charles Schultz Plaque for Excellence in Cartooning, the Scripps-Howard Award for Best College Cartoonist and the Ignatz Awards for Outstanding Artist and Outstanding Comic for Liberty Meadows. He was born Duk Hyun Cho in 1971 in Seol, South Korea. At the age of six, he and his parents came to live in the United States. In college he created University. Upon graduating from the University of Maryland in 1996 with a degree in Nursing, he signed with Creators Syndicate, Inc. for a continuation of University as Liberty Meadows.