Items related to PREACHER VOL.6: WAR IN THE SUN 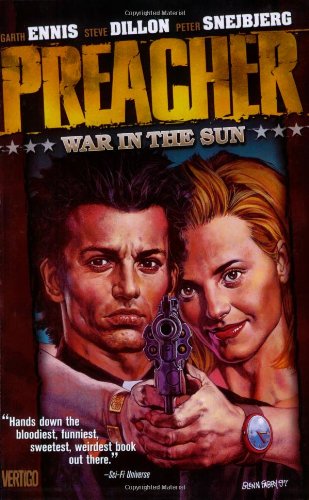 PREACHER VOL.6: WAR IN THE SUN

Quantity: 1
View all  copies of this book
Buy Used
Price: US$ 15.50 Convert Currency
Shipping: US$ 4.99 Within U.S.A. Destination, rates & speeds
Add to basket

The Reverend Jesse Custer faces his deadliest challenge yet in this, the sixth Preacher collection. Jesse, along with his gun-toting girlfriend, Tulip, and the hard-drinking Irish vampire Cassidy, faces a deadly showdown in the desert with the ruthless Starr and the forces of the U.S. military -- including a nuclear warhead.

A cornerstone of the modern comic industry, Garth Ennis is most easily recognized as the creator of Preacher, one of the best-selling graphic novel series of all time. His full list of writing credits is nothing short of extraordinary; his career highlights include "Judge Dredd, Hellblazer, The Demon, Hitman, Punisher, The Pro, War Story, and The Boys". Over the past ten years, Ennis has published numerous acclaimed and fan-favorite projects through Avatar Press, including "Dicks, Chronicles Of Wormwood, 303, Streets Of Glory", and the wildly successful Crossed series. He wrote and directed his first film, "Stitched", which Avatar Press continued as an ongoing series.

Simon Spurrier, a British author of comic books and novels, first began writing professionally in 2001. He contributed extensively to the library of respected UK publisher 2000 AD, including their flagship comic book series "Judge Dredd, Harry Kipling, Lobster Random, and The Simping Detective". He also wrote several novels set in the 2000 AD and Warhammer 40,000 story continuities. With the debut of his creator-owned series "Gutsville" in 2007, Spurrier began to work in the American comic book market, predominantly on such Marvel Comics properties as "Silver Surfer, Ghost Rider, and X-Men". In 2011, Spurrier launched a successful web comic through Avatar Press, "Crossed: Wish You Were Here", which presents his take on the on the popular horror franchise (CrossedComic.com).

Steve Dillon began drawing comics for Marvel U.K. but became best-known for his work on 2000AD and then his collaborations with Garth Ennis on Hellblazer and Preacher.

Steve Dillon began drawing comics for Marvel U.K. but became best-known for his work on 2000AD and then his collaborations with Garth Ennis on Hellblazer and Preacher.