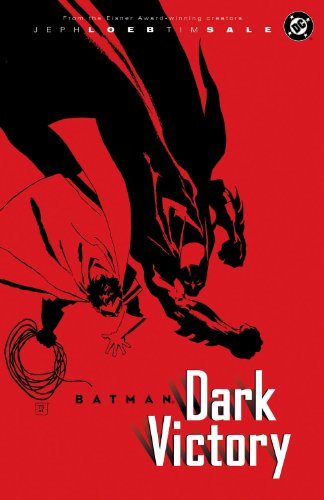 Quantity: 1
View all  copies of this book
Buy Used
Price: US$ 26.50 Convert Currency
Shipping: US$ 4.99 Within U.S.A. Destination, rates & speeds
Add to basket

The sequel to the critically acclaimed BATMAN: THE LONG HALLOWEEN, DARK VICTORY continues the story of an early time in Batman's life when James Gordon, Harvey Dent, and the vigilante himself were all just beginning their roles as Gotham's protectors.

Once a town controlled by organized crime, Gotham City suddenly finds itself being run by lawless freaks, such as Poison Ivy, Mr. Freeze, and the Joker. Witnessing his city's dark evolution, the Dark Knight completes his transformation into the city's greatest defender. He faces multiple threats, including the apparent return of a serial killer called Holiday. Batman's previous investigation of Holiday's killings revealed that more than one person was responsible for the murders. So the question remains: who is committing Holiday's crimes this time? And how many will die before Batman learns the truth?

Jeph Loeb is an Emmy award nominated and Eisner award winning writer/producer living in Los Angeles.   In television, his many credits include Smallville, Lost and Heroes and in film, Teen Wolf and Commando.   In comics, he is best known for his work with the supremely talented artist and partner-in-crime TIM SALE on BATMAN: THE LONG HALLOWEEN, SUPERMAN FOR ALL SEASONS,CATWOMAN: WHEN IN ROME for DC as well as Daredevil Yellow, Spider-Man Blue and Hulk Gray for Marvel.
Tim Sale is not only the artist for the numerous collaborations with Jeph Loeb listed above, but has also worked on DEATHBLOW, BATMAN: LEGENDS OF THE DARK KNIGHT, Grendel, Wolverine/Gambit: Victims, Billi 99, Amazon, and various other projects. He had the distinct honor of being the first creator chosen for the artist spotlight series SOLO.