Items related to PREACHER VOL.8: ALL HELLS A COMING 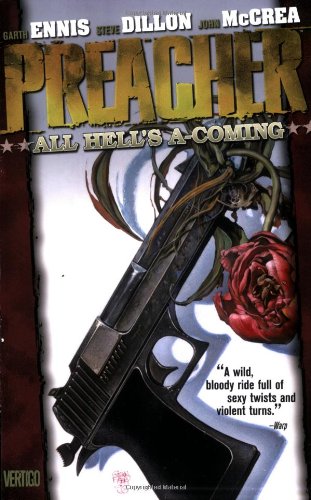 PREACHER VOL.8: ALL HELLS A COMING

Quantity: 1
View all  copies of this book
Buy Used
Price: US$ 28.50 Convert Currency
Shipping: US$ 4.99 Within U.S.A. Destination, rates & speeds
Add to basket

Jesse Custer is on the trail of his gun-toting girlfriend, Tulip, who believes that he's dead. And when Jesse finally catches up with Tulip, she tells him the truth about his supposed friend, Cassidy, leading up to a brutal confrontation between Custer and Cassidy.

It's trite but true: you can't keep a good man down. Holier-than-anyone Jesse Custer comes back from the dead--or wherever--in the eighth collection of Preacher, All Hell's A-Coming. Garth Ennis's knack for developing characters slowly and almost effortlessly pays off more and more with each issue, and by now Custer, his lover Tulip, and his vampire friend Cassidy are as complex as anyone you're likely to meet. The story arc focuses on Tulip's own resurrection from her unlife of booze, drugs, and Cassidy as she reunites with the Preacher, and this powerful tale doesn't require any superheroic conflict to affect the readers. (Fans of the Voice will be disappointed to learn that it's only used once, in an amusing throwaway scene.) As this develops, the nefarious Grail suffers from internal struggle, and poor Arseface finds himself on the backside of fame, setting the stage for plenty of future weirdness. In addition to the regular collected issues, All Hell's A-Coming includes the one-shot "Tall in the Saddle," a fast-moving story from Jesse, Amy, and Tulip's younger days. If you've never met the Preacher, isn't it about time you found the fear of God? --Rob Lightner