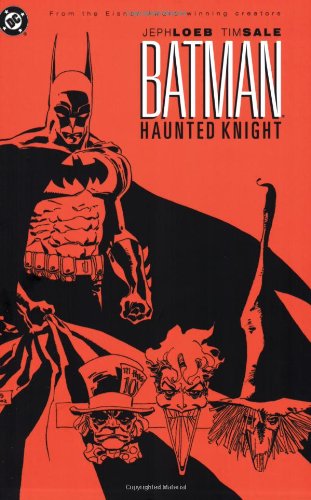 Quantity: 1
View all  copies of this book
Buy Used
Price: US$ 16.50 Convert Currency
Shipping: US$ 4.99 Within U.S.A. Destination, rates & speeds
Add to basket

This graphic novel by Jeph Loeb and Tim Sale-the creative team behind the classic BATMAN: THE LONG HALLOWEEN-includes three dark tales of horror and intrigue featuring Batman facing off against his most demented and wicked foes. Taking place on the most evil of holidays, Halloween, the Darknight Detective confronts his deepest fears ashe tries to stop the madness and horror created by Scarecrow, the Mad Hatter, the Penguin, Poison Ivy and the Joker.

Jeph Loeb is an Emmy Award-nominated and Eisner Award-winning writer/producer living in Los Angeles. In television, his many credits include Smallville, Lost, and Heroes, and in film, Teen Wolf and Commando. In comics, he is best known for his work with the supremely talented artist and partner-in-crime Tim Sale on Batman: The Long Halloween, Superman for All Seasons, and Catwoman: When in Rome for DC as well as Daredevil Yellow, Spider-Man Blue, and Hulk Gray for Marvel.

Tim Sale is the Eisner Award-winning artist of Batman: The Long Halloween, Superman for All Seasons, Hulk: Gray, and more. His art was prominently featured on the hit NBC series Heroes.