Items related to THE SANDMAN LIBRARY, VOL.4: SEASON OF MISTS 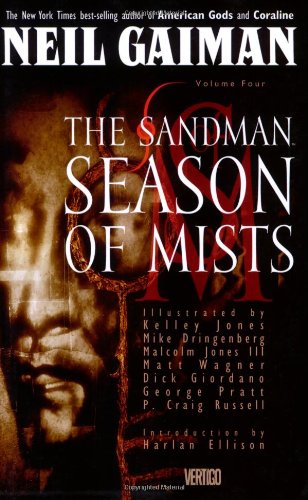 An attempt to summon and imprison Death, results, instead, in the capture of Morpheus, the Sandman, who must regain the tools of his powers.

In many ways, Season of Mists is the pinnacle of the Sandman experience. After a brief intermission of four short stories (collected as Dream Country) Gaiman continued the story of the Dream King that he began in the first two volumes. Here in volume 4, we find out about the rest of Dream's Endless family (Desire, Despair, Destiny, Delirium, Death, and a seventh missing sibling). We find out the story behind Nada, Dream's first love, whom we met only in passing during Dream's visit to hell in the first book. When Dream goes back to hell to resolve unfinished business with Nada, he finds her missing along with all of the other dead souls. The answer to this mystery lies in Lucifer's most uncharacteristic decision--a delicious surprise.

There is something grandiose about this story, in which each chapter ends with such suspense and drive to read the next. This book is best summed up by a toast taken from the second chapter: "To absent friends, lost loves, old gods, and the season of mists; and may each and every one of us always give the devil his due." --Jim Pascoe