Items related to SUPERMAN FOR ALL SEASONS 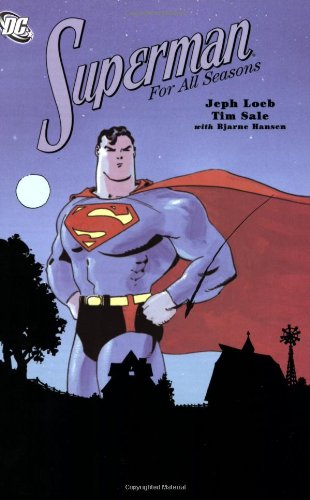 SUPERMAN FOR ALL SEASONS

Quantity: 1
View all  copies of this book
Buy Used
Price: US$ 35.00 Convert Currency
Shipping: US$ 4.99 Within U.S.A. Destination, rates & speeds
Add to basket

Title: SUPERMAN FOR ALL SEASONS

In this coming-of-age tale witness the experiences and adventures that transform a simple country boy into the world's greatest hero. Told through the course of four seasons in the Man of Steel's adolescent life, it illustrates that it is the person, not the powers, that makes Superman a hero.

The catalyst for the "Smallville" television program, SUPERMAN FOR ALL SEASONS is emotional and insightful, humanizing the alien from another planet so that he is not only realistic but also relatable. It also features in-depth characterizations of Lana Lang, Lex Luthor, Lois Lane and the Kents.

This volume collects Superman For All Seasons #1-4.

Jeph Loeb is an Emmy award nominated and Eisner award winning writer/producer living in Los Angeles.   In television, his many credits include Smallville, Lost and Heroes and in film, Teen Wolf and Commando.   In comics, he is best known for his work with the supremely talented artist and partner-in-crime TIM SALE on BATMAN: THE LONG HALLOWEEN, SUPERMAN FOR ALL SEASONS,CATWOMAN: WHEN IN ROME for DC as well as Daredevil Yellow, Spider-Man Blue and Hulk Gray for Marvel.


Tim Sale is not only the artist for the numerous collaborations with Jeph Loeb listed above, but has also worked on DEATHBLOW, BATMAN: LEGENDS OF THE DARK KNIGHT, Grendel, Wolverine/Gambit: Victims, Billi 99, Amazon, and various other projects. He had the distinct honor of being the first creator chosen for the artist spotlight series SOLO.