Items related to DEATH: THE HIGH COST OF LIVING 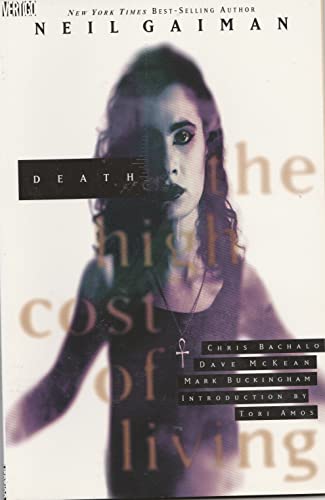 DEATH: THE HIGH COST OF LIVING

Quantity: 1
View all  copies of this book
Buy Used
Price: US$ 41.50 Convert Currency
Shipping: US$ 4.99 Within U.S.A. Destination, rates & speeds
Add to basket

/Neil Gaiman /Dave McKean, Chris Bachalo and /Mark Buckingham, illustrators From the pages of THE SANDMAN LIBRARY Neil Gaiman tells the story of the one day every hundred years when Death, older sister of The Sandman, walks among humans to gain a better understanding of.

The High Cost of Living is a continuation of Harvey Award-winning fantasy writer Gaiman's series detailing the cosmic duties of a loose family of seven immortals. Not quite Gods, they embody realms of psychic experience: Dream, Desire, Despair, Destiny, Delirium, Destruction and Gaiman's very popular character, Death. Reaper, yes; but Death's not very grim as she goes about her business visiting the just-about-to-die and ushering them into their new existence. In this story she meets Sexton, a teenager contemplating suicide, and they end up searching New York City to find a witch's heart (the old hag hid it centuries ago, it's a witch tradition), so the old girl can hide it again. Up pops the Eremite, an evil wizard type, out to steal Death's mysterious necklace, who makes the usual threats against life and limb. Gaiman has created a character sweetly at odds with her modbid duties; dressed like a Satanic rocker, she's as pretty as a cheerleader and even more upbeat. While Gaiman brings a gritty urban contemporaneity to the fantasy genre, the story also suffers from a TV script-like sensibility--danger-defying quips, the good-hearted overweight black neighbor, melodramatic villain. Nevertheless the combination of wry mystic immortal and MTV slacker produces an engaging chemistry. Top-notch production, and although the illustration is a bit stiff, it's stylishly rendered and very nicely colored. The introduction is by pop singer Tori Amos.
Copyright 1994 Reed Business Information, Inc.