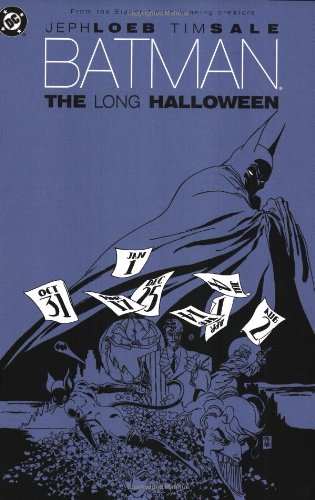 Quantity: 1
View all  copies of this book
Buy Used
Price: US$ 15.50 Convert Currency
Shipping: US$ 4.99 Within U.S.A. Destination, rates & speeds
Add to basket

Taking place during Batman's early days of crime fighting, this new edition of the classic mystery tells the story of a mysterious killer who murders his prey only on holidays. Working with District Attorney Harvey Dent and Lieutenant James Gordon, Batman races against the calendar as he tries to discover who Holiday is before he claims his next victim each month. A mystery that has the reader continually guessing the identity of the killer, this story also ties into the events that transform Harvey Dent into Batman's deadly enemy, Two-Face.

This edition includes original 13-issue series as well as four additional story pages cut from the original series, which are presented fully colored and restored to their place in the story.  Also featured are sketches and an introduction by the director and writer of The Dark Knight Rises, Christopher Nolan and David Goyer.

It's refreshing when you find a Batman story that both is epic and successfully explores the core of a resolutely explored character. Taking as its catalyst a sub-plot from the seminal Batman: Year One, the story revolves around murders occurring on national holidays, the victims connected to Mob boss "The Roman." Dubbed "Holiday," the killer uses an untraceable handgun and leaves small trinkets at the scene. Plenty of suspects are available, but the truth is something the Dark Knight never suspected. This series scores two major coups: it brilliantly portrays the transfer of Gotham rule to the supervillains and charts the horrific transformation of Harvey Dent from hardened D.A. to the psychotic Two-Face. Both orbit around the sharply portrayed relationship between Dent, Commissioner Gordon, and Batman: a triumvirate of radically different perceptions of Justice. It is always great to see the formative incarnation of Batman, drenched in noir here.

Jeph Loeb's writing is keenly aware that Batman is a detective, and Tim Sale portrays a Gotham that is a fertile breeding ground for corruption and madness. Here, Batman is coming to terms with the potent image he projects and the madness it attracts. There are many fine Batman stories, but the ones that capture the spirit with extreme clarity are few. On this alone, The Long Halloween comes highly recommended. Masterfully executed, this is an excellent chance to revisit the world of Batman as fresh as in the summer of 1939. --Danny Graydon