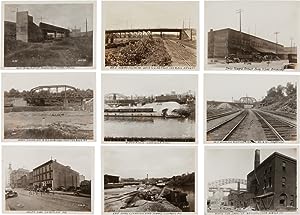 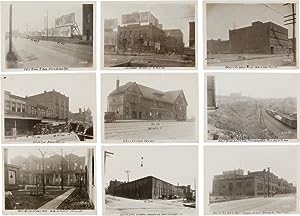 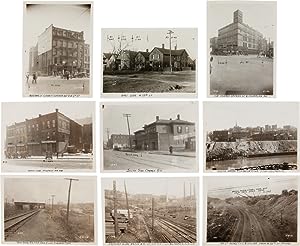 [SUBSTANTIAL COLLECTION OF ANNOTATED PHOTOGRAPHS PERTAINING TO THE DEVELOPMENT OF CLEVELAND, OHIO DURING THE 1920s]

161 black-and-white glossy Kodak prints, each 5 x 7 inches. Each photograph with an inventory number and often a date in white printed in the negative, and with further manuscript notes in black ink in the lower margin or on the photograph itself. Minor rubbing and edge wear. Very good plus. An engaging and useful collection of photographs with often extensive annotations in the image area, documenting the development of Cleveland in the 1920s. The subjects of the photographs range widely around the city of Cleveland, showing stores, factories, warehouses, breweries, foundries, welding companies, and much more, along with residences, railroads, bridges, undeveloped or underdeveloped areas, and scenes along the Cuyahoga River. The images are often populated with residents, sometimes posing for the photographer, and are also interesting for the automobiles, advertisements, and other tertiary subject matter contained in them. The annotations describe the subjects and locations of the photographs, with streets delineated on one or both sides of buildings. The annotations also include address designations, along with parcel numbers for the associated plots of land. The intention of the photographs is not entirely clear, and would be an interesting research project for scholars of urban development, specifically in early 20th- century Ohio. We believe that the likely purpose of the photographs relates to some form of a real estate development project in Cleveland, or real estate purchasing. One of the largest construction and redevelopment projects in Cleveland in the 1920s was the Union Terminal and Terminal Tower, which resulted in the closing of the Diebolt Brewing Company (pictured here); perhaps the collection relates to that monumental project. The photographs could have also served a municipal function such as defining political districts, construction, rezoning, or property taxation. However, with the explosion of growth and construction in Cleveland in the decade of the Roaring Twenties, the photographs most likely relate to the city's development or redevelopment. Aside from the original intent of the compiler, the photographs themselves provide an important and extensive survey of the city of Cleveland in the early 1920s. Many of the buildings and residences pictured here are long gone, along with the people, automobiles, advertising billboards, and undeveloped areas in the photographs. The photographs were taken and produced by the Fowler and Slater Company, a prominent Cleveland photography studio founded in the city in 1895. A valuable and insightful collection of annotated photographs of the city of Cleveland at the outset of a period of rapid change. Seller Inventory # WRCAM55993