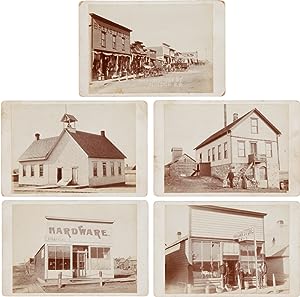 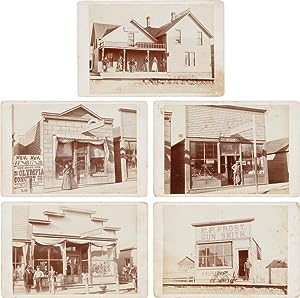 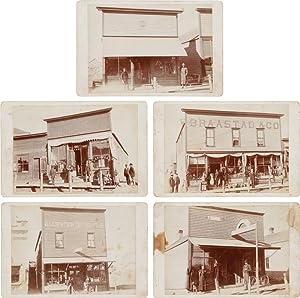 Fifteen black-and-white photographs, each 4 x 5 1/2 inches, on slightly larger card mounts. Mounts slightly bowed. One image with short horizontal crease, some slight surface wear and light soiling to several images. Overall, very good. A collection of fifteen rare images of the small frontier town of Alcester, South Dakota. Alcester is located in the southeastern corner of South Dakota, between Sioux Falls and Sioux City, Iowa, about thirty-five miles north of the Missouri River, but only eight miles from the South Dakota-Iowa border along the Big Sioux River. Alcester was founded in 1879 by the Western Town Lot Company of Chicago, ahead of the expansion of the Chicago Northwestern Railroad's extension into Dakota Territory. One of the town's 135 plats could be purchased for $50 each, and the town grew steadily over the next decade, when a train depot, a lumber company, and several other businesses opened to service the new development. The motto of Alcester is "Small Town Treasure," which the city has been able to maintain, as the population at the last census was only 807 residents. The present grouping of photographs shows Alcester in its fledgling years, with the most notable image featuring clapboard businesses ranged down the west side of Iowa Street, with several horse-drawn wagons parked in front. This image is the only photograph present here with an identifying caption in the negative, which reads, "West Side Iowa St. Alcester S.D." In addition, there are individual images of most, if not all, of the buildings on Iowa Street, along with other buildings in Alcester, often with residents or businessmen posed out front. In addition to the photograph on Iowa Street, the present grouping features E.F. Frost, gunsmith; the Scandia Drug Co.; Alcester Furniture Co., specializing in "Furniture & Undertaking"; Cole & Cole Star Restaurant, showing a woman in a dress out front, next to a sign advertising The Olympia Concert Co.'s performance that night; a hotel, with six people standing on the porch near a small sign advertising "Agency Books, Magazines, and Book Binders"; Anderberg Dry Goods & Groceries; the Alcester Drug Co.; Braastadt & Co.; J. Hubbard Hardware; the "Bargain Store"; a building marked simply "Hardware. Millinery"; an unidentified storefront; a large clapboard house built atop a stone foundation, with a family of four and their dog posing in front; and the town church, complete with humble belfry and bell. The present images provide a rather comprehensive view of the economic composition of Alcester at the time they were taken. Though the photographer is unidentified, he or she was likely working either from a traveling studio, or from a studio in nearby Sioux Falls or Sioux City. In any case, the photographs are well composed and endure as a permanent record of a small South Dakota town during its first decade or two in the late 19th century. Images of small western communities are growing increasingly scarce in the market, and increasingly desirable. These are the first we have ever seen of Alcester - a "Small Town Treasure" then, and now. Seller Inventory # WRCAM55965