Skip to main content
Home [Hancock Family] [ARCHIVE OF CORRESPONDENCE AND PHOTOGRAPHS TO AND FROM MULTIPLE ... 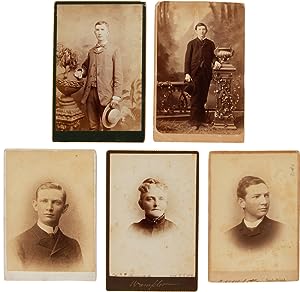 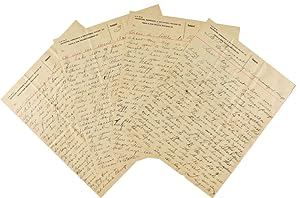 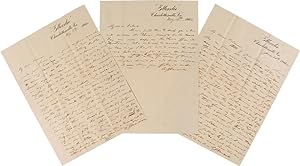 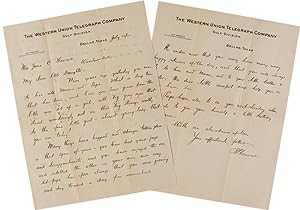 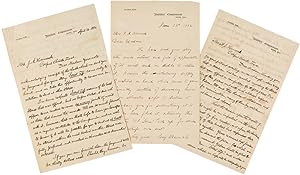 [ARCHIVE OF CORRESPONDENCE AND PHOTOGRAPHS TO AND FROM MULTIPLE GENERATIONS OF THE HANCOCK FAMILY OF VIRGINIA, ALABAMA, AND TEXAS]

Approximately thirty-two letters, some with original transmittal envelopes; twenty-three photographs and real photo postcards; and assorted family documents, calling cards, and greeting cards. Overall very good condition. Housed in a modern gray archival box. A wide-ranging collection of correspondence, photographs, and documents centered on the Hancock family of Virginia, Alabama, and Texas in the second half of the 19th century, and first quarter of the 20th. The Hancock family members involved in the correspondence or pictured in the photographs in this archive include Benjamin Palmer Hancock, Arthur B. Hancock, Thomas Benton Hancock, Jane A. Hancock, Jane C. Hancock, Richard J. Hancock, Claudia Hancock, and Harris Hancock. Richard J. Hancock, Sr. was father to Richard J., Jr., Arthur B., and Harris Hancock, and uncle to Benjamin Palmer Hancock. Jane C. Hancock was B.P. Hancock's daughter. Thomas Benton Hancock and Jane A. Hancock were married, and Claudia Hancock was their daughter. The family, though spread out over vast distances, seems to have remained relatively in touch with one another. The correspondents also often write from or receive letters from different cities, suggesting they moved around a bit or traveled more widely than most families at the time. Benjamin Palmer "B.P." Hancock (1868-1943) lived in Dallas, Crockett, and Corpus Christi, Texas in the late 19th-century, and worked for both the Mexican National Railroad and the Texas Mexican Railway. He later returned to Texas, working as the Division Traffic Superintendent for the Western Union Telegraph Company in Dallas from 1913 until his retirement in 1938. He also maintained a family estate in Scotia, Alabama. In one 1905 letter, B.P. Hancock writes home to his wife Martha in Scotia, with detailed instructions for her imminent travel to meet him in New York City. He also writes a very loving letter to his daughter, Jane C. Hancock in 1913, while she was living in Winslow, Arkansas. He praises Jane for "the fine little girl - almost young lady - that you are today." Richard J. Hancock, Jr. (1873-1920) writes a long letter to B. Palmer Hancock on April 12, 1890. Richard was apparently working for the Galveston, Harrisburg & San Antonio Railway, as he writes his four-page letter on the company's stationery, and mentions hearing about a couple of colleagues "surveying a new extension for S[an] A[ntonio] P[acific] road." Richard acknowledges that B.P. and their mother are going to Virginia to visit family, and encourages B.P. to "make a good impression on all of the Hancock family." He also offers B.P. a new suit and money to look good in front of the Virginia Hancocks. Richard then reports on a recent trip "down to Rio Grande" where he "had lots of fun." Richard J. Hancock, Sr. (1838-1912) writes three letters to his nephew, B. Palmer Hancock in 1902, on "Ellerslie" stationery. Ellerslie Plantation (later Ellerslie Farm), near Charlottesville, Virginia, came into the Hancock family after Richard married Thomasia Harris, whose family owned the estate. Richard J. Hancock served as a Confederate captain under Stonewall Jackson during the Civil War. His letters to Palmer are mostly concerned with family business matters, especially Palmer's property in Alabama. At one point, Richard consoles B.P. for his mother's ill health, apparently from typhoid fever. In his third letter, Richard mentions his growing aversion to the life of a farmer at Ellerslie, commenting that he would "quit farming and sell out but for my son Arthur." Richard had already largely turned away from farming to breeding thoroughbred racehorses at Ellerslie, and became quite famous and successful at the venture, winning the 1884 Preakness Stakes with his horse, Knight of Ellerslie. His son, Arthur Hancock, later established a breeding farm in Kentucky named Claiborne Farm, and became one of the most legendary horse breeders of the 20th century. Thomas Benton Hancock (1834-1870) lived in Centrevi. Seller Inventory # WRCAM55851

Title: [ARCHIVE OF CORRESPONDENCE AND PHOTOGRAPHS ...