Items related to The Fall of the House of Usher and Other Tales (Signet... 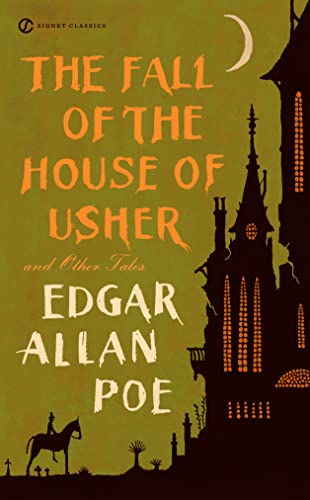 The Fall of the House of Usher and Other Tales (Signet Classics) [Mass Market Paperback] Edgar Allan Poe; Stephen Marlowe and Regina Marler

Quantity: 2
View all  copies of this book
Buy Used
Price: US$ 2.50 Convert Currency
Shipping: US$ 3.99 Within U.S.A. Destination, rates & speeds
Add to basket

Title: The Fall of the House of Usher and Other ...

Classic tales of mystery, terror, imagination, and suspense from the celebrated master of the macabre.

This volume gathers together fourteen of Edgar Allan Poe's richest and most influential tales, including: “The Pit and the Pendulum,” his reimagining of Inquisition tortures; “The Tell-Tale Heart,” an exploration of a murderer’s madness, which Stephen King called “the best tale of inside evil ever written”; “The Fall of the House of Usher,” Poe’s tour de force about a family doomed by a grim bloodline curse; and his pioneering detective stories, “The Purloined Letter” and “The Murders in the Rue Morgue,” featuring a rational investigator with a poetic soul. Also included is Poe’s only full-length novel, Narrative of A. Gordon Pym.

Edgar Allan Poe (1809–1949) received a good education, first in England, then in a private school at Richmond, and later spent a year at the University of Virginia before he ran away to enlist in the army. Between 1827 and 1831, he published three volumes of poetry: Tamerlane (1827), Al Aaraaf (1829), and Poems (1831). From 1831 to 1835, he lived in Baltimore, where he began a lifelong struggle with poverty, disappointments in love, and addiction to alcohol. This last defect made it impossible for him to retain the editorial positions he later secured on magazines in Richmond, Philadelphia, and New York, despite the fact that the tales and book reviews he contributed greatly increased circulation. In May 1836, he married Virginia Clemm, a child of thirteen and the daughter of a paternal aunt. In April 1844, he moved his family to New York, and in January of the following year his literary fortunes turned when his poem “The Raven” appeared in the New York Evening News. Overnight, he became the most talked-about man of letters in America. Early in 1847 his wife died, and the year 1848 saw the end of two unhappy love affairs. He died on October 7, 1849.

Stephen Marlowe (1928–2008) was the author of more than fifty novels, including the internationally acclaimed Memoirs of Christopher Columbus, which was awarded the French Prix Gutenberg du Livre in 1988, and in 1997, he received a lifetime achievement award from the Private Eye Writers of America. His novel The Lighthouse at the End of the World revolves around the real and imagined life of Edgar Allan Poe.

Regina Marler is the author of Bloomsbury Pie: The Making of the Bloomsbury Boom, and editor of Queer Beats: How the Beats Turned America On to Sex. While still in graduate school, she was chosen by the heirs of Virginia Woolf to edit the letters of Woolf’s artist sister, Vanessa Bell, which appeared as Selected Letters of Vanessa Bell in 1993. Marler lives in San Francisco.