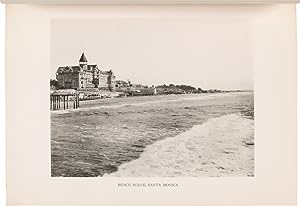 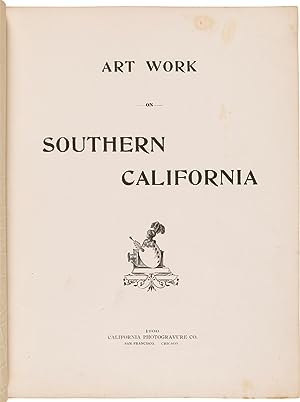 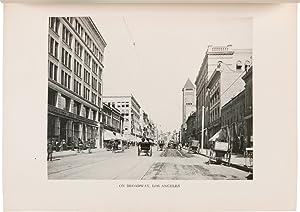 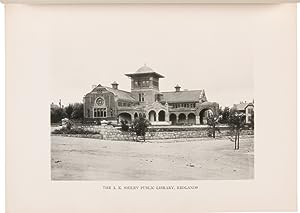 Twelve parts. 24pp., plus 130 photogravures on 109 leaves. Folio. Original textured burgundy leatherette wrappers, gilt title on front wrapper. Light wear to extremities of all volumes, minor soiling to covers of a few volumes. Occasional light foxing (images not affected). About very good. A complete set of the "Art Work" series for Southern California, with many striking views, from Santa Barbara to San Diego, and from the beaches to the Inland Empire. It is a marvelous record of Los Angeles and numerous small communities during an important period in the area's development. Like many sets in this series, the majority of plates depict recently constructed civic buildings such as schools, churches, hospitals, etc., as well as landscaped public spaces and expanding agricultural scenes. Although citrus farming was already a major industry and immigration was booming, these scenes show Southern California "before": before the movie industry, the freeways, etc. Notable in this collection are lovely photogravure images of the State Normal School, Los Angeles (in 1919 it became the southern branch of the University of California); the College of Liberal Arts building ("Old College") at the University of Southern California; the A.K. Smiley Public Library in Redlands; the Los Angeles County Court House (the first building built as a courthouse in L.A.); and shots of several streets in and around downtown Los Angeles, including tree-lined Sunset Boulevard in Hollywood - then still a dirt road. A brief text authored (and signed in facsimile) by Lou V. Chapin promotes Southern California as a land happily blending a modern and industrialized region with lush parks and gardens, abundant agriculture, and long beaches, but it's the exquisite images that close the deal. This set has only appeared once at auction in recent years, and is scarce in the trade. OCLC lists seventeen copies, the majority held by California institutions. A fantastic visual record of California's "Southland" on the cusp of a boom in growth. OCLC 20876322, 13326640. Seller Inventory # WRCAM55762