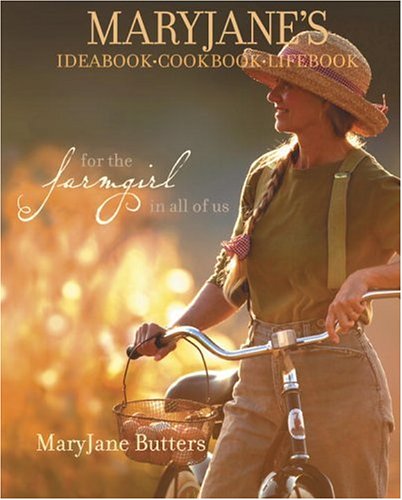 Mary Jane's Ideabook - Cookbook - Llifebook: For the Farmgirl in All of Us

Quantity: 1
View all  copies of this book
Buy Used
Price: US$ 18.00 Convert Currency
Shipping: US$ 3.50 Within U.S.A. Destination, rates & speeds
Add to basket

MaryJane Butters’ sense of purpose is as big as the Idaho landscape where her organic farm is nestled. She wants nothing less than to reconnect us all with the food we eat and the heritage of farming that belongs to all of us, and nothing more than to empower and encourage rural women everywhere ... she is cultivating not just a farm but a philosophy of living. — Body & Soul

Carpenter, waitress, janitor, upholsterer, secretary, milkmaid, wilderness ranger, environmental activist, entrepreneur–the founder of MaryJanesFarm has worn many hats in her day, but none more proudly than that of modern-day farmgirl. Speaking to the farmgirl in all of us, MaryJane Butters offers a captivating introduction to the organic lifestyle, resurrects forgotten domestic arts, and shares lessons gleaned from her diverse background and two decades of life as an Idaho farmer.

Whether you simply need encouragement to embrace a more authentic, wholesome lifestyle or you’re looking for guidance on building a greenhouse, chopping firewood, hosting a town event, caring for a flock of chickens, making your own butter, growing a winter salad, or choosing a water filter, MaryJane’s Ideabook, Cookbook, Lifebook is both an inspiration and a practical road map for farmgirls of all stripes.


Dreams are MaryJane Butters’ business, and she has always pursued them without pausing to consult conventional wisdom.
— House & Garden

MaryJane Butters, a natural teacher, has a gift for simplification, and makes it seem that everything she does is easy and attainable.
— The New Yorker

MaryJane Butters discovered she was a writer when, at age forty-five, she needed a mail-order catalog for her line of organic foods, produced at her Idaho farm. When her passion for good stories got out of hand, her catalog became a "storefront" magazine (MaryJanesFarm), finding its way into stores like Barnes & Noble and Wal-Mart, and eventually landing on the desk of a literary agent in New York.

MaryJane grew up in Utah in a self-sufficient family of seven, longing for fertile ground where she could raise her own flock of chickens, maybe a cow or two, and a family. Working her way north, she made her living as a carpenter, waitress, seamstress, secretary, janitor, wilderness ranger, community organizer, and milkmaid.

Rooted now on her own five acres for the past twenty years (seven of those as a single mom), MaryJane has accomplished everything she set out to achieve, including a few surprises. Twelve years ago, she married her neighbor, Nick Ogle, a third-generation farmer. Together they raised four hard-working children, plus bees, chickens, goats, cows, peas, beans, hay, wheat, and every vegetable imaginable, including a biodiesel crop to fuel MaryJane's car. She also cultivated twenty-seven future organic farmers in her apprenticeship program called Pay Dirt Farm School, bought an historic flour mill, and created the "Farmgirl Connection," a website that brings together hundreds of women sharing their farmgirl dreams and big farmgirl hearts.