Items related to The Ear of the Heart: An Actress' Journey from...

Home Hart, Dolores; Deneut, Richard The Ear of the Heart: An Actress' Journey from Hollywood to Holy...
Stock Image 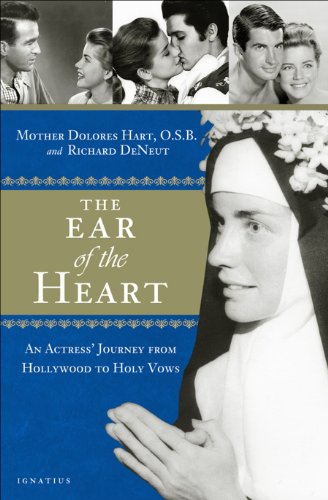 The Ear of the Heart: An Actress' Journey from Hollywood to Holy Vows

Quantity: 1
View all  copies of this book
Buy Used
Price: US$ 10.00 Convert Currency
Shipping: US$ 5.00 Within U.S.A. Destination, rates & speeds
Add to basket

first edition, first printing Book is in Very Good + condition. Boards have a tiny bit of shelf wear. Fore edges have a small amount of wear. Interior is clean and legible. Not remaindered. Dust Jacket is in Very Good + condition. Tiny bit of shelf wear/rub. Tiniest bit of wear along the edges. Not price clipped. Dust Jacket is covered by Mylar wrapper. Thanks and Enjoy.All-Ways well packaged, All-Ways fast service. Seller Inventory # 040821

Title: The Ear of the Heart: An Actress' Journey ...

"Listen and attend with the ear of your heart." - Saint Benedict.

Dolores was a bright and beautiful college student when she made her film debut with Elvis Presley in Paramount's 1957 Loving You. She acted in nine more movies with other big stars such as Montgomery Clift, Anthony Quinn and Myrna Loy. She also gave a Tony-nominated performance in the Broadway play The Pleasure of His Company and appeared in television shows, including The Virginian and Playhouse 90. An important chapter in her life occurred while playing Saint Clare in the movie Francis of Assisi, which was filmed on location in Italy.

Born Dolores Hicks to a complicated and colorful Chicago family, Mother Dolores has travelled a charmed yet challenging road in her journey toward God, serenity and, yes, love. She entered the Abbey of Regina Laudis in Bethlehem, Connecticut, at the peak of her career, not in order to leave the glamorous world of acting she had dreamed of since childhood, but in order to answer a mysterious call she heard with the "ear of the heart". While contracted for another film and engaged to be married, she abandoned everything to become a bride of Christ.

Mother Dolores Hart, O.S.B., is prioress of the Abbey of Regina Laudis in Bethlehem, Connecticut. A former actress, she remains a voting member of the Academy of Motion Picture Arts & Sciences.

For many years Richard DeNeut was a publicist for the Hollywood firm Globe Photos. He co-authored actress Patricia Neal's autobiography As I Am (Simon and Schuster, 1988) and wrote the text for Inside Hollywood: 60 Years of Globe Photos (Konemann, 2001).