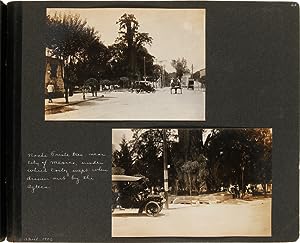 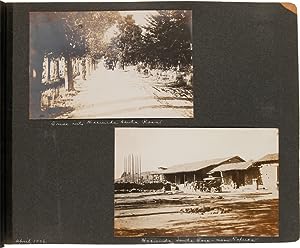 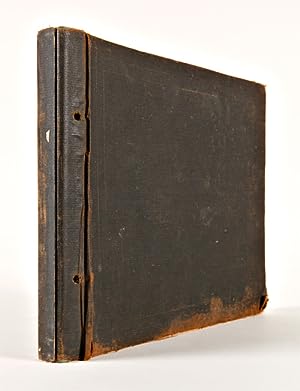 Forty-eight silver gelatin photographs, most approximately 4 1/2 x 6 1/2 inches, captioned in white ink throughout. Oblong folio. Contemporary black cloth. Binding a bit frayed and worn, lightly soiled. A few leaves slightly chipped, minor silvering to handful of images. Overall very good. An exceptional annotated vernacular photograph album documenting a road trip across Mexico in 1906, with images originating at San Luis Potosi and proceeding to Mexico City and beyond. The traveler's automobile is featured in several of the photographs, in front of notable sites, in cities and towns, and along poor dirt roads. This is the earliest photographic record of automobile travel in Mexico that we have seen. A contemporary notation on the front pastedown of the album identifies this as "W.C. White's pictures - Mexican trip, April 1906." The photographs capture local scenery, indigenous people, the Mexican National Railway, sights in Mexico City, and the general ambience of life in Mexico City at the turn of the century. Opening images show a "burro train" and men gathering water at a cistern "such as are used in dry, high plateaus." These are followed by images of the "Old Spanish viaduct on road between City of Mexico and Toluca," a shot "On road outside of Toluca Gen. Gonzales Governor of State of Mexico, standing up in car," and a "Typical station scene," showing a train at the rail depot surrounded by Mexican onlookers, and a nice photograph of a woman seated outside a small house which is captioned "Typical section house, Mexican National Railway. Notice wicker bird cage, woman washing, and pig." The photographer then proceeds through the countryside to Toluca and the Hacienda Santa Rosa, documenting street scenes in Lerma (including the "Old Spanish Gateway" and an "Old Spanish Bridge"), and capturing a bird's- eye view of the town of Ocoyoacac as seen from the road above the town. Images in or near Toluca include the Hidalgo monument, the statue of Columbus, a house belonging to Pedro Diaz, and two more photographs featuring Governor Gonzales. There are also images of the Casino at Chapultapec, the Castle of Chapultapec ("an old Aztec Palace of Montezuma.rebuilt and is now the country residence of the President"), the Church of the Virgin of Guadalupe, the President's Palace, a "Statue of the Aztec defenders," the iron statue of Don Carlo V, a "flower festival on the bank of the canal, City of Mexico," a shot showing "Mexican Houses," and the monastery of El Desierto in Mexico City. The travelers capture a few images of the "Noche Triste Tree," where legend says Cortez paused to weep after being driven out of Tenochtitlan by the Aztecs. The final image in the album is of three Mexican men with a shovel standing next to a mound of dirt, two of whom look directly into the camera; the supercilious caption reads, "Mexicans at work. They have one basket and take turns filling it up and carrying it. Some day, if they live long enough, they will get the dirt moved." An exceedingly-early automobile journey through Mexico by an American contingent, with informative annotations throughout. Seller Inventory # WRCAM55552