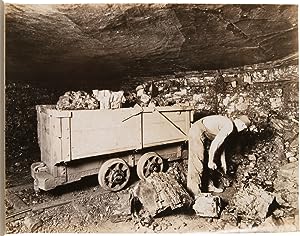 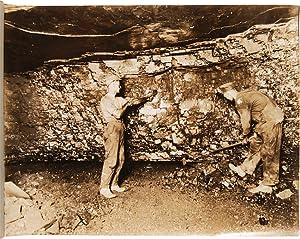 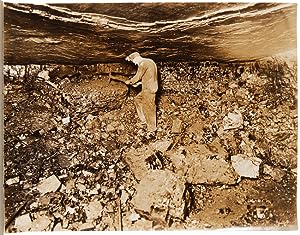 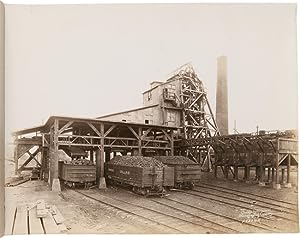 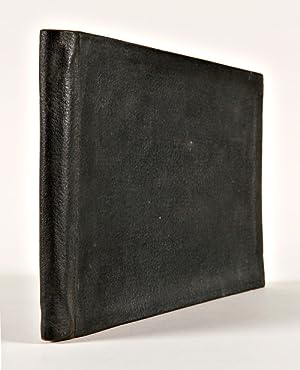 Seventeen large-format, black-and-white photographs, backed on linen, each 7 1/2 x 9 1/2 inches. Oblong quarto. Contemporary black textured cloth. Minor soiling and wear. Images a bit dust-soiled. Very good. An impactful and informative collection of photographs documenting the process of coal extraction from inside a shaft mine to the loading of the railway cars. The album includes exterior views of a few different mines, with prominent headframes; the first image is titled "Mine No. 3" in the negative. This image also features an early model automobile, from the 1930s at the latest. Five images capture the underground workings of the miners as they chisel away large blocks of coal from a wall in a pinched, claustrophobic setting. One image shows a hallway with a wood plank floor and walls supported with corrugated metal. This is followed by six views of the ground-level processing area, where the coal is dumped onto large conveyor belts that load it into railway cars. In one of the exterior views a Rock Island railway car is prominent, loaded with coal, likely on its way to Chicago. The last two images - close-up, top-down views of rail cars overflowing with coal - are from the New York Central Railroad. Six of the images carry a photographer's stamp reading "Chicago Architectural Photographing Company" in the negative. The company was founded in 1885 to meet the demand for architectural photography in the bustling post-fire building boom in Chicago. Their prolific photographic services were employed by architectural legends such as Adler & Sullivan, Frank Lloyd Wright, and Burnham & Root. In addition to a vast array of buildings and construction projects, the company photographed various mining companies in Illinois and Indiana, though it seems to have been a small part of their business. A handful of institutional collections include scattered holdings of mining photographs taken by the company, but nothing as comprehensive as the present album. An important album of coal mining photographs that capture the cramped working conditions inside the mine in a visceral manner, along with a peak into the process of how past generations transported one of the most important energy sources of the time. Seller Inventory # WRCAM55644