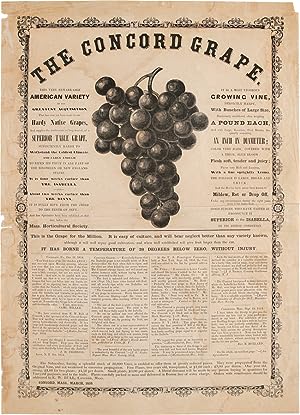 THE CONCORD GRAPE. THIS VERY REMARKABLE AMERICAN VARIETY IS THE GREATEST ACQUISITION THAT HAS EVER YET BEEN MADE TO OUR HARDY NATIVE GRAPES, AND SUPPLIES THE DESDERATUM SO LONG WANTED, OF A SUPERIOR TABLE GRAPE.

Illustrated broadside, 19 x 13 1/2 inches. A few small chips and tears in the edges, neat tape repairs on the verso. Old stains and tidelines. Good overall. A striking and persuasive broadside singing the praises of the Concord grape, illustrated with a handsome, large woodcut of a bunch of dark, ripe grapes. This broadside was issued by Ephraim Wales Bull, the New England farmer who developed the Concord grape around 1849. It quickly grew in popularity for its ability to withstand the chilly climes of New England, and for its versatility as a table and juice grape. Here, ten years after his initial cultivation of the Concord, Bull attempts to reclaim his share of the market for his grape, by offering direct bulk sales of the vines. The upper half of the broadside is dominated by the illustration of a bunch of Concord grapes, and text touting its virtues - including its ability to withstand the cold climate of the Northeast, the size of its bunches; the color, taste, and juiciness of its fruit; its imperviousness to mildew, rot, or drop-off, and its earlier ripening and superior taste to rival varieties, the Isabella and the Diana. The lower half of the sheet consists of testimonials from growers and nurserymen as to the fine qualities of the Concord grape, especially as compared to the Isabella. Finally, costs of the vines - individually or by the dozen - are given, with orders to be directed to Ephraim Bull in Concord. We find no copies of this broadside listed in OCLC. A significant artifact of the marketing of a staple American grape, issued by its developer. Rare. Seller Inventory # WRCAM55633