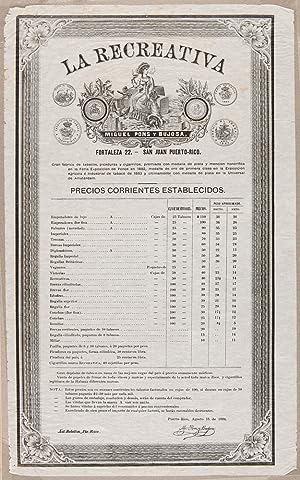 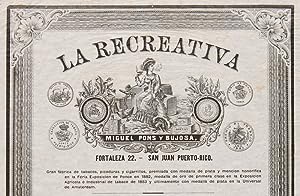 Engraved broadside, 20 x 11 inches, on very thin paper. Minor chipping along edges, a few spots of faint foxing. Very good. In tan cloth portfolio. A visually-striking engraved broadside with sharp images and attractive typography advertising Puerto Rican tobacco, and Don Miguel Pons y Bujosa's premiere tobacco products in particular. In the upper third of the sheet, there is a large vignette of an elegantly dressed woman smoking a cigar, sitting atop shipping crates and barrels, and holding tobacco leaves and the end of a cornucopia overflowing with cigars and tobacco canisters. On the left, a large marine anchor leans against the crates and in the foreground are several smaller crates and canisters labeled with different types of cigars (brevas, conchas, flor fina, regalia). In the background, one can just make out a large ship on the water. This image was likely used on the seal for the firm's cigar boxes as well. Surrounding the vignette are rectos and versos of the medals awarded to the firm in the three expositions highlighted in the text: "medalla de plata y mencion honorifica en la Féria Exposicion de Ponce en 1882, medalla de oro de primera clase en la Exposicion Agricola é Industrial de tabaco de 1883 y últimamente con medalla de plata en la Universal de Amsterdam" (silver medal and honorable mention at the Ponce Exhibition in 1882, a first-class gold medal at the Agricultural and Industrial Tobacco Exhibition of 1883, and recently with a silver medal at the Amsterdam Universal). The lower two-thirds has a list of current prices and available packaging for twenty- seven varieties of tobacco, followed by brief notes on sourcing the tobacco and some specifics on shipping costs and policies for commercial clients. Tobacco, along with sugar and coffee, had long been a cash crop in Puerto Rico, but because it lacked the esteem of Cuban tobacco, most of it was consumed locally, and only small quantities were exported to Europe. In the last decades of the nineteenth century, Cuba began importing Puerto Rican tobacco for "tripa," or filler, the individual tobacco leaves used in the body of the cigar. This did much to enhance the reputation of Puerto Rico's tobacco trade, and once the U.S. seized the island, tobacco became a substantial part of Puerto Rico's economy. It is unclear how successful Miguel Pons y Bujosa was in the long term, however he does appear as a member of the San Juan city council in the May 5, 1891 issue of GAZETA DE PUERTO-RICO (p.5). We could find no instances of this broadside in OCLC, and this is the first copy we have seen. Seller Inventory # WRCAM55649