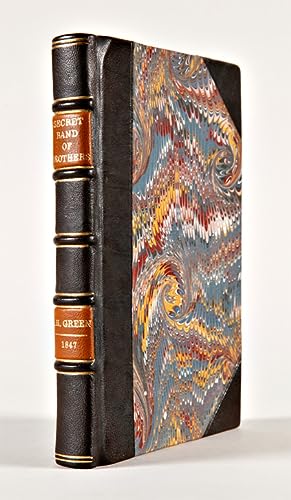 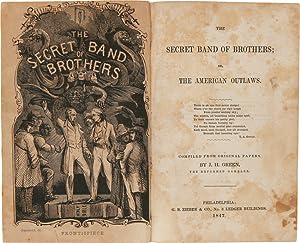 THE SECRET BAND OF BROTHERS; OR, THE AMERICAN OUTLAWS

192pp. plus six plates (including two copies of the frontispiece, one bound in to resemble a front wrapper). 12mo. Modern three-quarter morocco and marbled boards, gilt leather labels. Tanning and foxing, repair to verso of first frontispiece. Good. First edition of one of the classics in American gambling literature. The author is Jonathan H. Green (1813-87), renowned professional gambler and, later, reformer. Green was a gambler who became a crusader against illegal gambling, and this work is a lurid expose of crime, cheating, and vice. In the introduction Green says that this work is unlike any other he has ever written - unlike, in fact, any work ever before published in America: "It is not a mere exposure of gambling, nor yet an attack on the character of particular gamblers. It is a revelation of wide-spread organization - pledged to gambling, theft, and villainy of all kinds." Howes calls this a sequel to Green's GAMBLING UNMASKED. "Exposé of a secret organization of gamblers and criminals. Pages 147-62 relate his trip to Texas and the Choctaws in 1833" - Eberstadt. A rare work on early American gambling. HOWES G367. SABIN 28534. EBERSTADT 162:355. Seller Inventory # WRCAM55516

Title: THE SECRET BAND OF BROTHERS; OR, THE ...