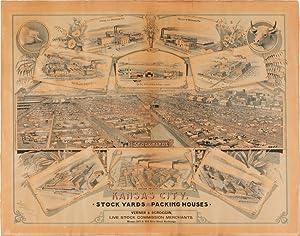 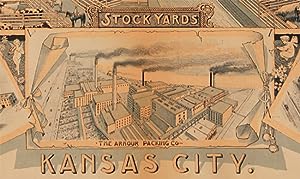 Lithograph, printed in blue and black, 22 x 28 inches. Uniformly toned, a handful of closed marginal tears. Very good. Shrink-wrapped to acid-free foam core. An unrecorded promotional broadside for the Kansas City Stock Yards printed around the turn of the 20th century. The piece was sponsored by Verner & Scroggin, Live Stock Commission Merchants, with offices in the Live Stock Exchange; their information is printed in a box just below the title. A central bird's-eye view of the stock yards is bordered on top and bottom by eight smaller vignettes of related companies, mostly meat processing and packing plants. These companies are Phoenix Packing Co., Alcutt Packing Co., George Fowler & Sons, Kansas City Horse & Mule Market, Jacob Dold Packing Co., Swift and Co., The Armour Packing Co., and Kingan & Co., Limited. The top left corner has a circular vignette of a pig; the top right corner the same for a steer. The bottom left corner notes the broadside was printed by the Union Bank Note Company. A small printed notice in the border below the bird's-eye view reads, "Drawn by E.A. Filleau, KC Mo." Another identifies the publisher, W.A. Barbot, who created a handful of maps and views which seem to mostly center around the Denver area, including an 1891 Denver souvenir album, a perspective map of Denver in 1892, and a Denver trade and labor periodical in the 1890s. His presence in Kansas City is likely testament to the growing power of the stock yards on locations farther west, such as Denver. The Kansas City stock yards were established in 1871, largely by investors from Boston, who were attempting to create a rival cattle market to the one thriving in Chicago. Kansas City quickly grew a close second to Chicago through several factors, including a plethora of railroad lines, proximity to western and southwestern cattle producers, high-quality facilities, and competitive yardage fees. The stock yards were built on the Kansas side of the Kansas River south of the tracks belonging to the Union Pacific, Kansas Pacific, and Missouri Pacific railroads, but soon expanded to parts of the Missouri side as well. This helped make the Kansas City Stock Yards the premier hub for the Western cattle trade by the turn of the century. Judging by the construction and the packing houses mentioned here, this print was produced before the calamitous 1906 fire, from which the stock yards nevertheless quickly recovered. By 1917 the influence of the stock yards and packing houses was so significant to the national food supply that they were intentionally burned, largely believed to be the work of German terrorists looking to slow down the war effort. Also helping to date the broadside is the artist's credit, belonging to Emery A. Filleau (1855- 1935), a prominent New York-born artist who lived and worked in Kansas City until about the turn of the century, when he moved to Houston, Texas. In fact, in Powers' TEXAS PAINTERS, SCULPTORS & GRAPHIC ARTISTS, the authors contend that Filleau was already in Houston "before 1900." According to Susan V. Craig's BIOGRAPHICAL DICTIONARY OF KANSAS ARTISTS (ACTIVE BEFORE 1945), Filleau advertised himself in an 1894 Kansas City directory as "artist, designer, illustrator, and general sketch artist; portraits, landscapes, buildings, birds-eye views and street scenes in all materials and for all purposes." Filleau appears in OCLC as the illustrator for a handful of western-related works printed in Kansas City during his time there, including COWBOY LIFE ON THE SIDETRACK, AMONG THE OZARKS, and LAST RAID OF THE DALTONS. This attractive view is not listed on OCLC, nor in Reps. A rare and significant view of a location vital to the cattle trade. Susan V. Craig, BIOGRAPHICAL DICTIONARY OF KANSAS ARTISTS (ACTIVE BEFORE 1945), p.123. Powers, TEXAS PAINTERS, SCULPTORS & GRAPHIC ARTISTS: A BIOGRAPHICAL DICTIONARY OF ARTISTS IN TEXAS BEFORE 1942, p.168. Seller Inventory # WRCAM55490