Items related to The Metamorphoses Of Ovid 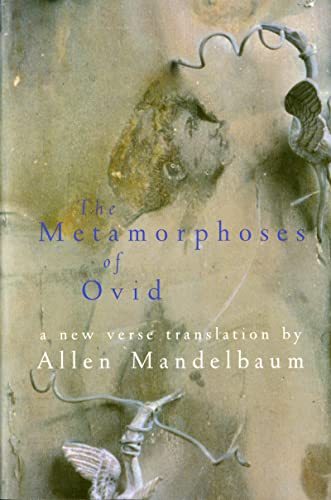 The Metamorphoses Of Ovid

Title: The Metamorphoses Of Ovid

Through Mandelbaum’s poetic artistry, this gloriously entertaining achievement of literature-classical myths filtered through the worldly and far from reverent sensibility of the Roman poet Ovid-is revealed anew. “[An] extraordinary translation...brilliant” (Booklist). With an Introduction by the Translator.

Publius Ovidius Naso, whom we know as Ovid, was already established as a writer when The Metamorphoses was published in A.D. 8, when he was 52 years old. It had taken him a decade to compose his great poem, during which time he published little, but the Roman world was still abuzz with excitement over his richly erotic Art of Love. So, unfortunately, was the court of Augustus Caesar, and the emperor banished the poet to what is now Romania. Augustus may have taken exception to the poet's turn to the impolite realm of the body--or he may have objected to a rumored affair between Ovid and the emperor's nymphomaniacal daughter Julia, who figures so prominently in Robert Graves's Claudius novels. The poet who had declared Rome to be his only home could have found no worse punishment than exile, but no amount of pleading could sway Augustus, and Ovid died on the shores of the Black Sea a decade later. Full of veiled political and historical references, The Metamorphoses lived on to become a permanent fixture in the canon of European literature. In Allen Mandelbaum's hands, it lives on for a new generation.

ThriftBooks is a fully independent seller of used books, having sold more than 160 million used and new books since we started in 2003. Each quality used book is sorted, graded, shelved and shipped by hand by our team of dedicated employees in our seven warehouses across the US. We have the best selection of books, in the right condition and format, at everyday low prices. We also have a dedicated, US-based Customer Service team, ranked in the top three by Newsweek for Best Customer Service in 2018 and 2019, so you can shop with confidence. We support and invest in our employees, appreciate and value our customers, and truly believe in the power of the written word to educate, energize, and engage readers of all ages and interests.


We guarantee each book that we send you. If you have any problems, please contact
our dedicated customer service department. They will do everything possible to
ensure you are happy with your order.


All domestic Standard shipments are distributed from our warehouses by OSM, then handed off to the USPS for final delivery.

2-Day Shipping is delivered by FedEx, which does not deliver to PO boxes.

International shipments are tendered to the local postal service in the destination country for final delivery – We do not use courier services for international deliveries.