Items related to SCHEME FOR SELLING BY CERTIFICATE, AND DISTRIBUTING... 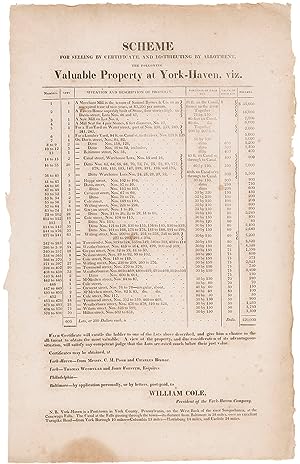 SCHEME FOR SELLING BY CERTIFICATE, AND DISTRIBUTING BY ALLOTMENT, THE FOLLOWING VALUABLE PROPERTY AT YORK-HAVEN, VIZ

Published by [N.p., but likely either Philadelphia or Baltimore, 1814
Save for Later
From William Reese Company - Americana (New Haven, CT, U.S.A.)

Letterpress broadside, approximately 17 3/4 x 11 inches. Dark stain in lower margin, minor spotting. Very good. Untrimmed. One of only three located copies of this land lottery broadside pertaining to York-Haven, Pennsylvania, located on the Susquehanna River, about fifty miles from Baltimore. The bulk of the broadside is taken up with a listing of property, including the "Situation and Description" of the land, its size, and its dollar value potentially available to purchasers of lottery certificates. Almost all of the lots, 593 out of the 600 available, are designated for small residential plots measuring from just 30-by- 80 feet to one large plot measuring 30-by-320 feet. The first six lots pertain to a handful of businesses already built near the canal, including a merchant mill, tavern, sawmill, and lumber yard. The certificates could be purchased from one of the company's agents in York-Haven, York, or Baltimore; the company also lists Philadelphia, but provides no agent in that city. The broadside is signed in type at the bottom by William Cole, the President of the York-Haven Company. This is followed by a short description of the town: "a Post-town in York County, Pennsylvania, on the West Bank of the river Susquehanna, at the Conewago Falls," and a list of distances from York-Haven to other prominent cities, namely Baltimore, York Borough, Columbia, Harrisburg, and Carlisle. The York-Haven Company was incorporated by an act of the Pennsylvania General Assembly on March 26, 1814. Its investors, including William Cole, were primarily Baltimore merchants. The company laid out the town of York Haven in two sections in 1814 - "upper town" was perched on the hill and "lower town" was situated by the canal on the Susquehanna River. Because of the canal, York Haven became an important trading center until the advent of the railroads. As of the 2010 census, just 709 people lived in York Haven. OCLC records just two copies, at Yale and the American Antiquarian Society. However, the Yale copy is noted as imperfect in their online catalogue. We could locate no copies in auction records. An interesting and informative broadside pertaining to early 19th-century Pennsylvania real estate and business development, from the time before "scheme" was a pejorative. OCLC 233650527. Seller Inventory # WRCAM55491

Title: SCHEME FOR SELLING BY CERTIFICATE, AND ...

Publisher: [N.p., but likely either Philadelphia or Baltimore