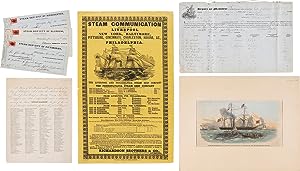 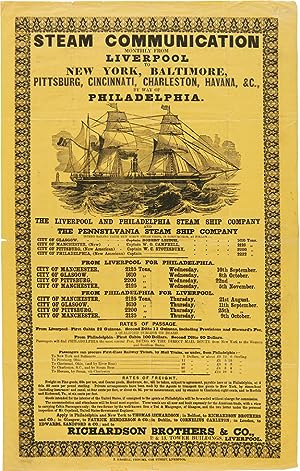 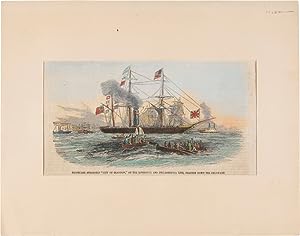 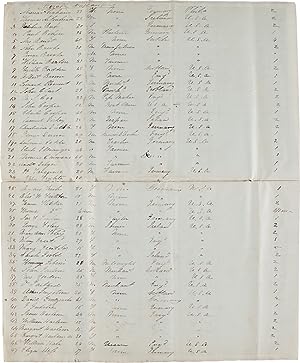 Five items, detailed below. Overall very good. A small but important collection of documents recording the immigration of Western Europeans to Philadelphia, California, Canada, and other North American locales aboard the ship CITY OF GLASGOW in 1852. Starting in the 1820s, Philadelphia became a leading port of entry for sailing vessels carrying predominately Irish and English immigrants from Liverpool. In the 1840s, Philadelphia was eclipsed by the port of New York, only to regain prominence with the introduction of steam navigation, and the formation of the Liverpool and Philadelphia Steam Ship Company (LPSSC) in 1849. Between 1847 and 1854 over 120,000 immigrants arrived through the port of Philadelphia, making the city the fourth busiest port in the country during those years. Established by William Inman in partnership with the Richardson Brothers (devoted Quakers), and headquartered in Liverpool, the LPSSC established a Philadelphia branch with Thomas Richardson as its agent in 1850. The company acquired its first ship, the CITY OF GLASGOW in October of that year. The company's first passage from Liverpool to Philadelphia left on December 17, 1850, carrying 400 passengers, and arrived in Philadelphia just ten days later. Refitted in 1852, the CITY OF GLASGOW was also the first steamship to carry steerage passengers, transporting thousands of European émigrés to the eastern seaboard of the United States over the next two years. Sadly, in March 1854 the CITY OF GLASGOW simply disappeared on its way from Liverpool to Philadelphia with 430 passengers, and its fate and whereabouts remain a mystery today. The present collection includes the following: 1) REPORT OR MANIFEST OF ALL THE PASSENGERS TAKEN ON BOARD THE City of Glasgow S.S.V. WHEREOF William Wylie IS MASTER, FROM Liverpool.[beginning of text]. Philadelphia: Maurice, Stationers, August 9, 1852. [15]pp., docketed on verso. Oblong folio. A couple of short closed marginal tears, else very good. A partially-printed manifest, completed in manuscript, listing 311 passengers on the newly refitted CITY OF GLASGOW single-screw steamship. About 100 passengers are listed with cabin seats, while over 200 are assigned to steerage; interestingly, this was the first year passengers were allowed in steerage for overseas travel. Each entry records the passenger's name, occupation, native country, and country of destination. The male passengers are mostly tradesmen, though there are also merchants, engineers, distillers, brewers, shopkeepers, a music teacher, vocalists, farmers, lawyers, and more. Most of the female passengers' occupations are recorded as "none" (as are a great deal of the men), though one woman is listed as a "shoe binder." The country of origin for most of the passengers is England, Scotland, or Ireland (this is just a few years after the mass exodus caused by the Great Potato Famine), but a healthy number of passengers hail from Germany. Almost all of the passengers hope to settle in the United States, but a handful are heading for Canada and one passenger to Peru. Three farmers from Ireland are headed to California specifically, and other cities identified by name include Baltimore, Pittsburgh, New York, and Toronto. Ages of the passenger range from six months to seventy-two years. A vital record of European émigrés to North America during a brisk era of immigration. 2) STEAM COMMUNICATION MONTHLY FROM LIVERPOOL TO NEW YORK, BALTIMORE, PITTSBURG [sic], CINCINNATI, CHARLESTON, HAVANA, &c., BY WAY OF PHILADELPHIA. Liverpool: T. Brakell, Printer, [n.d., but 1851]. Illustrated broadside, 17 1/2 x 11 1/4 inches. Old folds, minor creasing. Very good. A striking and apparently unrecorded broadside marking both the revitalization of the port of Philadelphia as a destination for immigrants to the United States, and steam navigation as the means by which they traveled. The Richardson Brothers' first steamship, CITY OF GLASGOW - the first steamship to demonstrate that Atlantic. Seller Inventory # WRCAM55343