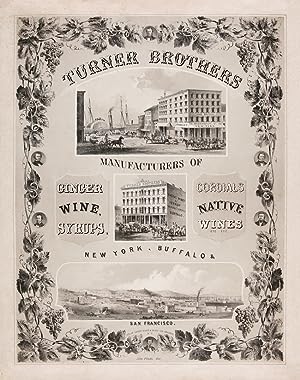 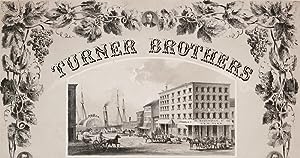 Illustrated lithographic broadside, 23 x 18 inches. Mild spotting, slightly trimmed. Overall, an excellent display piece in very good condition. An exceedingly rare pictorial broadside advertising Turner Brothers wines, syrups, and cordials. The broadside was drawn by John Ffooks, who depicts the manufacturing facilities of the Turner Brothers in New York City, Buffalo, and San Francisco in three separate insets. The latter depiction is especially interesting, as it sets the Turner Brothers' branch office and factory within a sprawling panoramic image of San Francisco - an early depiction of the city in such breadth and detail. The whole of the lithograph is bordered in artfully-executed grape vines and vine leaves interspersed with small vignette portraits of the six Turner brothers who were partners in the company. Turner Brothers Wines & Spirits enterprise, a major American concern with national distribution capabilities operated from 1847 until the mid-1860s. The upper vignette features a view of their premier store in New York City, located at 350-352 Washington Street, at the corner of Franklin (present- day Soho/Tribeca). In the middle is a view of their establishment in Buffalo, where the business was founded. In the lower part of the composition is a fine panorama of San Francisco (where Turner Brothers had established a store), taken from a south- easterly perspective (perhaps the Rincon Hill area), looking towards Telegraph Hill, with the bustling downtown and harbor in the foreground. It is lovely depiction of San Francisco captured in the aftermath of the Gold Rush; interestingly, the distinctive bottles of the Turner Brothers have been unearthed at several California Gold Rush boomtowns, including Monte Cristo, Chips Flat, Excelsior, Downieville, and Chaparral Hill. The present broadside also qualifies as a rare early work of California wine interest. The Turner Brothers Wines & Spirits Company was a brilliantly successful, albeit evanescent alcohol and medicinal spirits empire. The company was founded in 1847 in Buffalo by the six Turner Brothers (Malcolm, James, Thomas, Archibald, Robert, and George), who were originally from Delaware County, New York, and children of Scottish immigrants. They traded in wines and manufactured their own sodas, ginger and berry wines, and medicinal spirits. Their enterprise enjoyed rapid success, and they soon opened a large store and factory in New York City. James ran the establishment in Buffalo; Malcolm oversaw the New York premises; while Robert ran the show in San Francisco; the other brothers remained partners but were less active in the day-to- day business. Taking advantage of the massive wealth generated by the California Gold Rush, in 1853, the Turner Brothers opened a store in San Francisco, where they were one of the boomtown's earliest major distributors of alcohol. After making a large fortune, the brothers sold the business in the mid-1860s, and subsequent to that the assets traded under different names. The brothers then used the proceeds to establish the Turner Brothers Bank, headquartered in New York City, seeking to take advantage of the international railway boom. This initially proved successful, and they soon opened branches in Berlin, Paris, and London. However, during the Panic of 1873, the railway boom went bust, and the Turner bank filed for bankruptcy in 1876. While the brothers personally retained some of their wealth, only Archibald re-emerged as a prominent player, serving as president of several New York banks over the coming years. The lithographers, Sarony, Major, and Knapp were a prominent firm that operated in New York City in one combination or another from the early 1840s until 1867, at which time Napoleon Sarony (who had earlier worked for Currier & Ives along with Henry Major) left the company to open what would become a world- renowned photography studio. Based on this fact, coupled with the Turner Brothers selling the wine business in the. Seller Inventory # WRCAM55402