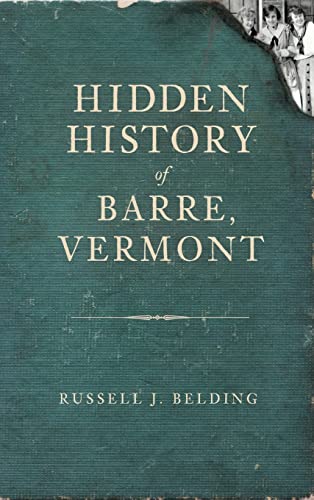 Quantity: 20
View all  copies of this book
Buy New
Price: US$ 21.53 Convert Currency
Shipping: US$ 18.19 From United Kingdom to U.S.A. Destination, rates & speeds
Add to basket

On the surface, Barre appears to be like many other Vermont communities--its scenery picturesque and its people friendly and industrious. But other stories, unique to Barre, lie hidden. During the nineteenth and twentieth centuries, newspapers reported many local events that reveal in charming detail what life was like during their own time. Local author Russell Belding has meticulously combed antique newspapers to find them and reveals how observing their change over time affords a fascinating look into the evolution of this community. Though they have been forgotten by time or replaced with more well-known tales, these moments in history have helped shape Barre into the New England community it is today.

Russell Belding loves the smell of old books in the morning, or any other time of the day for that matter. His house is filled with more books than he will ever be able to read. When he was a teenager, he traveled by bicycle to every township in Vermont. He has been coasting on that achievement ever since. He graduated in 1990 from Norwich University's Adult Degree Program under the tutelage of local legend Dick Hathaway. He has been researching the minutiae of Barre history for twenty years. He has been employed by the State of Vermont for nearly thirty years. He has a vast collection of pop music on various formats and can spot the anachronism in just about any TV show or movie that is set in the past, usually by virtue of the wrong song playing in the background. Aside from that, he doesn't consider himself to be too annoying. He lives in Barre with his wife, Lori, their two dogs and their cat. This is his third book.