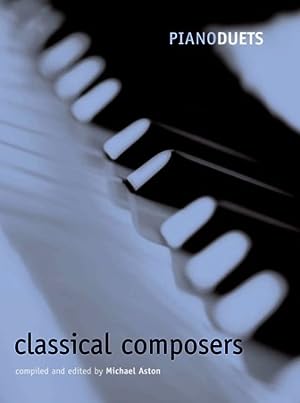 Quantity: 5
View all  copies of this book
Buy New
Price: US$ 19.62 Convert Currency
Shipping: US$ 18.21 From United Kingdom to U.S.A. Destination, rates & speeds
Add to basket

Piano Duets: Classical Composers presents varied and accessible repertoire for every duet player. The collection includes attractive new arrangements of orchestral and chamber gems, alongside new editions of original works written specifically for piano duet. You'll find sonata movements by less well-known composers of the period, Clementi and J.C.F. Bach, as well as Beethoven's complete Sonata in D major, one of the few original duet sonatas written by the composer. The volume is concluded with a light and attractive Minuet and Trio by Haydn, a colourful Theme and Variations by Mozart, and a graceful and flowing arrangement of Schubert's Entr'acte Music from Rosamunde.
Ranging from the intimate to the virtuosic, these pieces are ideal for duettists looking for new recital material as well as those beginning to explore the medium.

Michael Aston held an Exhibition for music at Cambridge University. After a short career in the Civil Service, he moved to Leeds, in 1979, and began a career as a freelance musician. A pianist specializing in accompaniment and piano duos, he taught piano and became involved in continuing
education, presenting courses for the universities of Manchester, Nottingham, and Cambridge. He is a lifelong enthusiast for the music of William Walton, and has lectured widely on the subject and visited the Walton estate in Italy. He has written about Walton for Classical Music magazine and edited
a volume of the William Walton Edition, published by Oxford University Press. He is the compiler of four volumes of piano duets published by OUP.

GreatBookPrices.com is your top source for finding new books at the absolute lowest prices, guaranteed ! We offer big discounts - everyday - on millions of titles in virtually any category, from Architecture to Zoology -- and everything in between. Discover great deals and super-savings, on professional books, text book titles, the newest computer guides, or your favorite fiction authors. You'll find it all - at HUGE SAVINGS - at GreatBookPrices. Browse through our complete online product catalog today. Serving customers around the world for years, we help thousands find just the books they're looking for -- at incredibly low, bargain prices.


Our warehouses across the globe are fully operational without substantial delays. We are working hard and continue to overcome the daily challenges presented by COVID-19. There have been reports that delivery carriers are experiencing large delays resulting in longer than normal deliveries to customers. See USPS's website for further detail. We would like to apologize in advance if your item arrives later than the expected delivery due date.