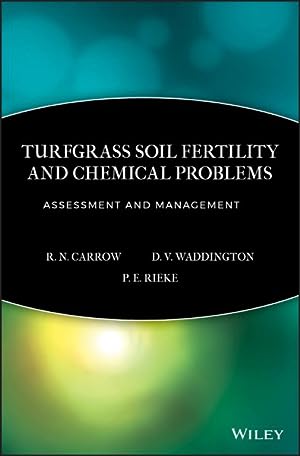 Quantity: 5
View all  copies of this book
Buy New
Price: US$ 115.76 Convert Currency
Shipping: US$ 18.07 From United Kingdom to U.S.A. Destination, rates & speeds
Add to basket

Turfgrass Soil Fertility and Chemical Problems is the best single-source, practical management tool that will help you overcome every fertility management challenge you face!

Turfgrass Soil Fertility and Chemical problems will:
* Help you pinpoint the effectiveness of fertilizer programs to ensure turfgrass quality, water quality, and environmental integrity
* Help you understand a multitude of turfgrass species and cultivars and their complex nutrient responses or requirements
* Explains site-specific fertilization, covering issues such as establishment on poor quality soils and the use of low-quality irrigation water
* Show you how fertilization is important for environmental, traffic, and stress tolerance, as well as recovery
* Show you how to apply the interpretation of soil, tissue, and water-quality test information in the development of fertilization regimes

He has served in many professional turfgrass manager and scientific society responsibilities. Dr. Carrow is a Fellow of the American Society of Agronomy and is Vice President of the International Turfgrass Society.

DONALD V. WADDINGTON is Professor Emeritus of Soil Science at Pennsylvania State University. He received his Ph.D. from the University of Massachusetts in 1964, and M.S. from Rutgers University in 1960, and a B.S. from Penn State in 1953. Following graduation he served for 2 years in the U.S. Army, and worked in the fertilizer industry for 2 years. He taught and conducted research in turfgrass programs at the University of Massachusetts (1960-1965) and at Penn State (1965-1991). He continued his activities for several years following retirement. He served as visiting scientist and taught in the turfgrass management program at Mississippi State University during the spring semester in 1997 through 2000. He has conducted research dealing with soil-related problems on turfgrass areas. Topics included N-source evaluation, soil test calibration, soil modifications and playing surface characteristics of sports fields. His teaching assignments have included courses in beginning soils, soil physics, soil physical properties on turf, turfgrass nutrition, weed control in turf, and turfgrass management.

He has served in many turfgrass industry and professional society offices and committees. His contributions have been recognized by various awards and honors including Fellow in the American Society of Agronomy, the Fred V. Grau Turfgrass Science Award from the Crop Science Society of America, and the Dr. William H. Daniel Founders Award from the Sports Turf Managers Association.

PAUL E. RIEKE is Professor Emeritus of Crop and Soil Sciences Michigan State University. His degree are Ph.D. from Michigan State University in 1963, and M.S. and B.S. from the University of Illinois in 1958 and 1956, respectively. He joined the faculty at M.S.U. in 1963 and retired in 1999. His research program has concentrated on cultivation, topdressing, and fertilization of turfgrasses. For 20 years he coordinated the turfgrass extension program at M.S.U. His teaching included courses in beginning soils, soil management, and turfgrass soil management, the latter having been taught to over 1600 students.

Dr. Rieke has served the turf industry and professional societies in a number of capacities. Among recognitions for Dr. Rieke's contribution as a turfgrass scientist are: Fellow of the Crop Science Society of America; Green Section Award and Piper and Oakley Award from the U.S. Gold Association; Distinguished Service Award from the Gold Course Superintendents Association of America; and Honorary Membership in Turfgrass Producers International.

GreatBookPrices.com is your top source for finding new books at the absolute lowest prices, guaranteed ! We offer big discounts - everyday - on millions of titles in virtually any category, from Architecture to Zoology -- and everything in between. Discover great deals and super-savings, on professional books, text book titles, the newest computer guides, or your favorite fiction authors. You'll find it all - at HUGE SAVINGS - at GreatBookPrices. Browse through our complete online product catalog today. Serving customers around the world for years, we help thousands find just the books they're looking for -- at incredibly low, bargain prices.


Our warehouses across the globe are fully operational without substantial delays. We are working hard and continue to overcome the daily challenges presented by COVID-19. There have been reports that delivery carriers are experiencing large delays resulting in longer than normal deliveries to customers. See USPS's website for further detail. We would like to apologize in advance if your item arrives later than the expected delivery due date.