Items related to The Yellow Kids Foreign Correspondents in the Heyday... 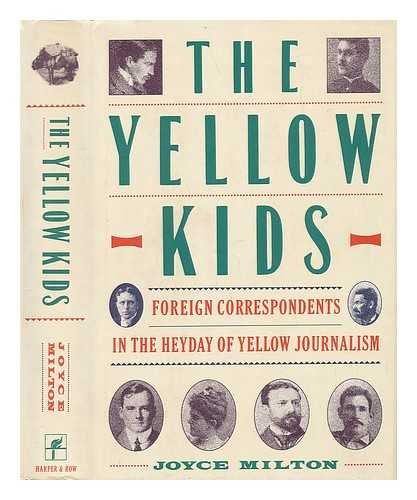 The Yellow Kids Foreign Correspondents in the Heyday of Yellow Journalism

Quantity: 1
View all  copies of this book
Buy Used
Price: US$ 14.00 Convert Currency
Shipping: US$ 9.50 From Canada to U.S.A. Destination, rates & speeds
Add to basket

Milton's book mainly chronicles the exploits of reporters during the Spanish-American War when "yellow journalism" flourished. Spurred by a circulation battle between William Randolph Hearst's New York Journal and Joseph Pulitzer's New York World , reporters, including Richard Harding Davis, Frederick Remington, Stephen Crane, George Rea, and Harry Scovel, sneaked in and out of Cuba, sometimes as rebels, sometimes as spies, but always creating their own stories and becoming the news themselves as they were arrested, thrown out, or killed in battle. The Pulitzer-Hearst rivalry remains the most insightful and entertaining slice of this era. This story is also told in W.A. Swanberg's Citizen Hearst ( LJ 8/61), but Milton provides the reporters' perspective. Recommended.
- Melinda Stivers Leach, Precision Editorial Svces., Wondervu, Col.
Copyright 1989 Reed Business Information, Inc.