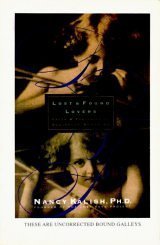 Explores more than one thousand respondents to a questionnaire who have rekindled long-parted romances and explains what the research reveals with regard to couples' successes and struggles in trying to find love with each other one more time. Tour.

Lost & Found Lovers, published by William Morrow in 1997, is the first - and still only- book about research on rekindled romances. My research was done between 1993 and 1996. The Internet was just in its infancy then. Since then, I have used the same questionnaire to survey a new group of participants, in 2005. There were 1300 participants who were similar to the 1990's participants: ages 18 -95, in 45 countries. This sample was, of course, taken after the Internet and email were common for everyone, and the survey was posted on the Internet for people to fill out.  As you would expect, the way people reconnected changed from finding each other by contacting mutual friends or using phone books to search engines, class websites, and now Facebook. So how did the research profiles change? There was no difference between the 1990's and 2005 couples with regard to their initial romances: when they met, how long they dated, why the romances ended, etc.  The main difference - and it's a big one - was that 62% of the 2005 Internet reunions were extramarital affairs. These were not people who were looking for affairs. It was so easy to send an email to old friends and lost loves... what could be the harm? Because these people were not actually "available" for a romance, the success rate for these couples was very low. If the couples were single, divorced, or widowed, my statistics were the same in 1996 and 2005: these are very successful romances.  So all the information in   Lost & Found Lovers is still valid, despite how the people reconnected then and now. It's about the people, not the technology. If you are interested in the dynamics of rekindled romances, Lost & Found Lovers will not disappoint.   --About Lost & Found Lovers