Items related to Tryst with Destiny 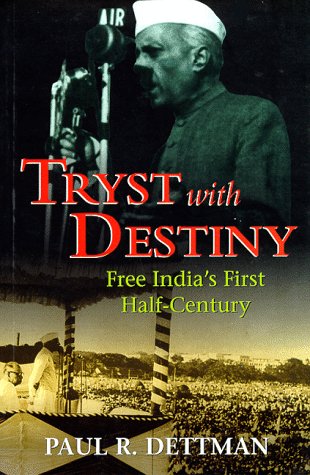 Quantity: 1
View all  copies of this book
Buy New
Price: US$ 5.47 Convert Currency
Shipping: US$ 7.97 From United Kingdom to U.S.A. Destination, rates & speeds
Add to basket

"Tryst with Destiny" takes a candid look at the India of the 1990s and contrasts it with the India of Nehru and Gandhi, that of the 1950s. What has changed in the past half-century? And what has not? In many ways, India has modernized: the country has industrialized and opened up its trade and financial markets; India is actively pursuing its nuclear program and has even embarked on a space program. And yet, in many other ways, India has reverted to its traditional roots: Hindu fundamentalism is on the rise, women are still viewed as being inferior to men, and individualistic behavior is reasserting itself.

Paul R. Dettman lived and worked in the India of Nehru's "tryst with destiny." This book is his attempt to analyze the changes -- political, social, economic -- that have taken place in India in the last 50 years. And going beyond the 50th anniversary year of 1997, the author projects the various scenarios that can be played out in the fields of politics, food supply, community development, and the environment.

After graduating from Oberlin College, serving in the US Air Force and earning an MA in International Studies from Harvard University, Paul Dettman worked on the staff of the American Embassy in London and later in the Pentagon as an intelligence analyst. In 1951 he returned to academic life to study for an MA in English in preparation for joining the staff of the American College in Madurai, South India. There he served as a lecturer in English and later as Bursar until 1963. During the four years that followed, he continued to work as a school administrator, but now in a South Indian hill station. His last two years in India were spent as a social worker in the slums of Madras City.

Following his return to the United States in 1969, he completed a PhD in Urban Studies at Kent State University. During the eleven years between 1976 and 1987, he was a member of the staff of a regional planning agency that was given the responsibility of bringing the Cuyahoga River that had caught fire in 1968 and the four other rivers that discharge into Lake Erie in the vicinity of Cleveland into compliance with the standards of the Federal Clean Water Act. Until 1996, he engaged in various forms of community service. Following his return from his first trip to India in 26 years, he has devoted his time to writing about the contemporary Indian scene.

We specialise in General Interest Books from South Asian countries.


Returns accepted if you are not satisfied with the Service or Book.