Items related to Life on a Plantation (Historic Communities (Hardcover)) 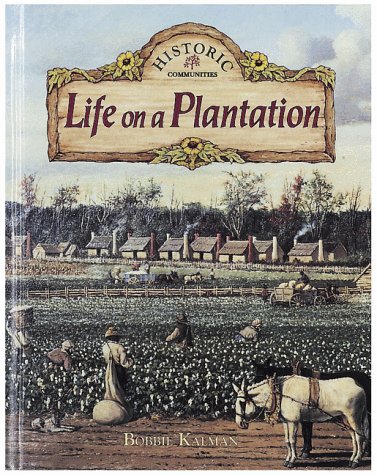 Quantity: 1
View all  copies of this book
Buy Used
Price: US$ 2.50 Convert Currency
Shipping: US$ 4.25 Within U.S.A. Destination, rates & speeds
Add to basket

Bobbie Kalman's acclaimed Historic Communities Series provides a close-up view of how people lived more than two hundred years ago. Colorful photos, many taken by Bobbie Kalman herself at restored historic villages across the country, help support the fascinating information. Children will have fun learning about: -- early homes and the settler community -- what people wore and the crafts they made -- how settlers made their living -- how they spent their leisure time -- the values, customs, and traditions of the early settlers The era of the southern plantation was a time when many wealthy planters lived in grand style next door to their slaves who helped them achieve it. Life on a Plantation introduces children to the daily routine of a Plantation detailing: -- life in the Big House and in the slave quarters -- work in the cotton, rice, and tobacco fields -- customs and traditions of both black and white communities -- how the slaves helped support each other and pass along African American traditions

Taken from Chapter 3: Plantation jobs The planter family The planter, or master, was the head of the plantation. He managed the money and farm work and told family members and slaves what they could and could not do. On smaller plantations, he often worked with his slaves in the fields. The planter's wife managed the Big House. She gave directions to the slaves on meal preparation, cleaning and watching the children. Some wives also supervised the women's workshops. If the planters children were old enough, they also helped manage the workers.