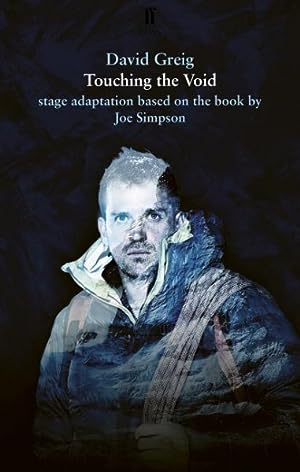 Quantity: 5
View all  copies of this book
Buy Used
Price: US$ 9.55 Convert Currency
Shipping: US$ 2.64 Within U.S.A. Destination, rates & speeds
Add to basket

In 1928 a journalist asked George Mallory why he wanted to climb Everest. Mallory said, "Because it's there"

Adapted for the stage by David Greig, Joe's story explodes into a bold theatrical fantasia. We discover the counter-cultural world of Alpine climbing and the sensual joy of the mountains; we bear witness to the appalling moment when Joe's climbing partner Simon Yates, battered by freezing winds and tethered to the injured Simpson, makes the critical decision to cut the rope.

Tense, funny and inquisitive, Touching the Void explores the mind's extraordinarily rich reservoirs of strength and imagination when teetering on the edge of death.

David Greig was born in Edinburgh. His plays include Europe, The Architect, The Speculator, The Cosmonaut's Last Message to the Woman He Once Loved in the Former Soviet Union, Outlying Islands, San Diego, Pyrenees, The American Pilot, Yellow Moon: The Ballad of Leila and Lee , Damascus, Midsummer [a play with songs], Dunsinane, The Monster in the Hall and The Strange Undoing of Prudencia Hart. In 1990 he co-founded Suspect Culture to produce collaborative, experimental theater work. His translations and adaptations include Camus's Caligula, Euripides' The Bacchae, Strindberg's Creditors and J.M. Barrie's Peter Pan.

SuperBookDeals.com is your top source for finding new books at the absolute lowest prices, guaranteed ! We offer big discounts - everyday - on millions of titles in virtually any category, from Architecture to Zoology -- and everything in between. Discover great deals and super-savings, on professional books, text book titles, the newest computer guides, or your favorite fiction authors. You'll find it all - at HUGE SAVINGS - at SuperBookDeals. Browse through our complete online product catalog today. Serving customers around the world for years, we help thousands find just the books they're looking for -- at incredibly low, bargain prices.