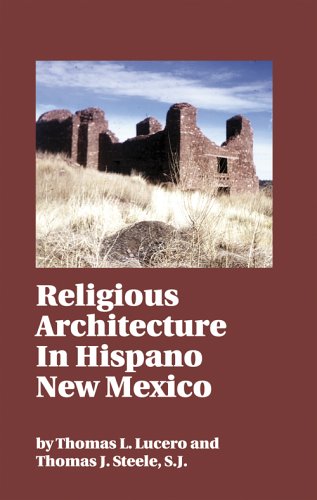 Thomas Lee Lucero was born in Albuquerque’s Plaza Viejo (Old Town) to Heraclio Lucero of the Lucero de Godoy lineage and Anita Chávez of the Dúran y Chávez lineage, two early-seventeenth-century New Mexican families. Tom studied in the grade and junior high schools at San Felipe and at Albuquerque High. From 1966 to 1968 he went on active duty with the 82nd Airborne and the 101st Airborne, and during his two years in Vietnam the Army awarded him two commendations and a Bronze Star. Stateside again, Lucero entered the Albuquerque Technical Vocational Institute, taught some classes in drafting, and in 1972 earned a diploma in civil technology—mainly architecture; he then completed a Bachelor’s in Fine Arts in 1974 and a Master’s in Secondary Education in 1977. He taught in the UNM School of Architecture and Planning and at the Southwestern Indian Polytechnical Institute and has been a licensed architect in private practice from 1984 to present. Thomas J. Steele was born in St. Louis County—at the wrong end of the Santa Fe Trail. He entered the Jesuit Order in 1951, was ordained in 1964, and studied for a doctorate in American Literature at the University of New Mexico. Having been interested in both religion and art, he inevitably fell in love with the santos and acquired the nucleus of the Regis University Collection of New Mexican Santos—seven hundred plus at present. He taught at Regis University for twenty-nine years and at UNM (part time) for twenty. Fr. Steele has written books and articles about literature and various topics of New Mexican Hispano religious culture: santos, passion plays, the Brotherhood, the Jesuits’ Conejos parish 1871-75, the Jesuits at San Felipe Neri 1868-1895, Padre Antonio José Martinez of Taos, Spanish-language religious oratory in New Mexico 1800-1900, Archbishop Jean Baptiste Lamy, and alabados (traditional Spanish hymns mainly from Mexico but sung in New Mexico).

We are an online internet bookstore. Although we maintain a broad general collection, we have a concentration of material on the American Southwest and Indians of North America, both history and literature. Digital photos on request. Email (s.armstrong.books@gmail.com)or phone (530 279-2190).


We also accept checks and money orders in US funds. Feel free to email or phone to confirm availability. Reserved items will be held for 10 days. Guaranteed returnable within 10 days of receipt, with phone or email notification, well packed and with delivery confirmation. (The following is information for "European Union Requirements Affecting USA Sellers." My name is Sara E. Armstrong. My business is operated as a sole proprietorship and is named "Sara Armstrong - Books." I live on County Road ...