Items related to Tales from the Couch: Writers on Therapy 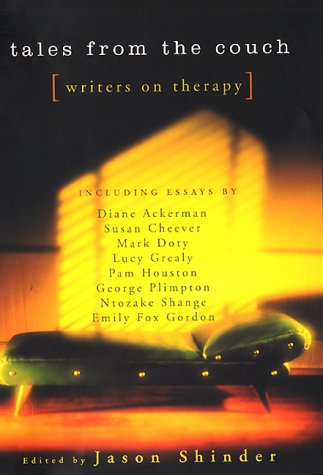 Tales from the Couch: Writers on Therapy

Quantity: 1
View all  copies of this book
Buy Used
Price: US$ 5.32 Convert Currency
Shipping: US$ 5.00 Within U.S.A. Destination, rates & speeds
Add to basket

Title: Tales from the Couch: Writers on Therapy

In recent years, psychotherapy has become a widely accepted and even popular form of treatment for mental and emotional troubles. Whether seeking guidance, comfort, help, or just some small measure of peace, more people than ever are going, to the therapist's couch for the "talking cure." The literary artist is no exception. In fact, the writer -- whose life in many cases serves as inspiration for his or her work -- is in an ideal position to evaluate the experience.

In this fascinating, revealing, and profoundly intimate volume, editor Jason Shinder has collected the personal reminiscences of some of the greatest writers today, all of whom have been to the therapist's couch and now offer valuable insight into the process. Adam Gopnik wryly discusses what was "easily one of the most unsuccessful psychoanalyses ever attempted" by an eccentric New York Freudian. Pam Houston offers a riveting account of the revolutionary technique that brought her back from the brink of madness. Mark Doty poignantly chronicles how therapy, and a trip to the Serengeti, awakened him to the truth that -- while his marriage was dead -- his future was still very much alive. And Susan Cheever takes a humorous look at psychotherapy through the eyes of a lifelong patient.

From poet and memoirist David Mura's serious concern that therapy in America fails patients of color to George Plimpton's health skepticism about the entire process -- from one writer who is joyous at the prospect of getting two therapists for the price of one to another who likens therapy to baseball, finding special comfort in Willie Mays -- these essays are by turns funny, introspective, inspiring, disquieting, thoughtful, often provocative, and always entertaining.

In this remarkable anthology of essays -- many never before published -- seventeen award-winning poets, playwrights, and writers confront depression, addiction, troubled pasts, and mental instability. In addition, they probe the effects of psychotherapy, from pivotal to nonexistent, on their lives -- as well as on the storytelling process itself. The result is a remarkably well-written, deeply revealing journey into the psyches of some of America's premier literary talents.

There are enough crazy artists out there to support the theory that one must be at least a little bit mad to be creative. Good news for the unhinged: one needn't trade one's sanity for one's creativity. In fact, word from the 17 authors anthologized in Tales from the Couch is that the therapeutic process actually enhances the creative one, often allowing the writer to produce, as Mark Doty puts it, "the work that has mattered most to me." Some of these authors, such as Pam Houston and Susan Cheever, consider themselves saved by psychotherapy. Others, like Phillip Lopate, regard therapy as "a treat I am entitled to give myself from time to time." Several see their therapeutic experiences as a kind of literary collaboration involving the telling and retelling of a story. Meg Wolitzer used therapy sessions to discuss problems in her work; Emily Fox Gordon considered the time spent with her therapist as "writing aloud"; and Rebecca Walker claims that the time spent scrutinizing herself "bore fruit: insights, yes, but also articles, essays, and book proposals."

And what a collection of therapists! "Finding the right shrink/analyst," says Ntozake Shange, "is as important a decision as finding a soul mate." The wrong therapists depicted here are both horrifying and hugely entertaining. Lucy Grealy encountered a therapist with tattoos on her face who claimed to have both a husband and a wife. Emily Fox Gordon tells of a married Dr. S. who took to showing up at her door with "bottles of wine and sheepish smiles." But leave it to George Plimpton to bring his psychiatrist--who kept his own sea lions in a freshwater quarry--to parties with him. "At one of them he had too much to drink and fell asleep under the hostess's bed upstairs," Plimpton says. The hostess was awakened in the middle of the night "by the sound of deep snoring under her bed." --Jane Steinberg