Items related to Sweeney Todd and the String of Pearls: An Audio Melodrama...

Home Yuri Rasovsky Sweeney Todd and the String of Pearls: An Audio Melodrama in ...
Stock Image 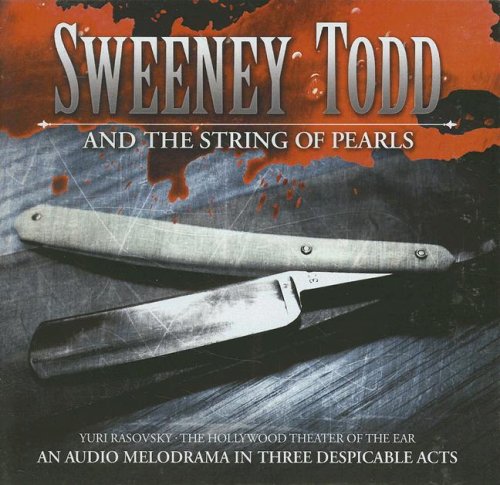 Sweeney Todd and the String of Pearls: An Audio Melodrama in Three Despicable Acts

Audio CD. Item is in good condition. Some moderate creases and light scrathces. Might be an ex-library copy and contain writing/highlighting. Might be missing booklet. Seller Inventory # DS-1433203413-3

Title: Sweeney Todd and the String of Pearls: An ...

According to legend, Sweeney Todd had his barber shop at number 186 Fleet Street, next door to St. Dunstan's Church, just a few blocks away from the Royal Courts of Justice. On this site, they say, he robbed and murdered more than 150 customers. To dispose of their remains, he carried them through underground tunnels to the bakery of one Mrs. Lovett a few blocks away, where they supplied the stuffing for her meat pies, the favorite mid-day repast of the lawyers who worked nearby and got their shaves from Sweeney Todd. The man you lunched with yesterday could be your lunch today!

The story first appeared in 1846 as a best-selling "penny dreadful," a sensational thriller published in installments. Before the final chapters even had a chance to hit the stands, the first stage version was packing them in at the Royal Britannia Saloon. Since then there have been numerous stage and literary versions of the story.

YURI RASOVSKY, author, producer, and director, has won high critical acclaim and numerous honors during his thirty-five-year career in audio drama, including a Peabody Award and, most recently, his third Audie® Award, earned in 2006 for Blackstone's Sherlock Holmes Theatre.

We specialize in hard to find and rare books online.


Shipping rates as defined on ABE Books. US orders will arrive in 10-14 business days. Returns must be returned and received within 30 days and may be subject to 15% re-stocking fee if the correct item is received in the condition stated. Buyers are responsible for shipping costs to and from our location if we are not at fault. Before shipping any return we must be contacted to provide the return address and label to track the item if we are at fault, otherwise the buyer will be responsible for a...