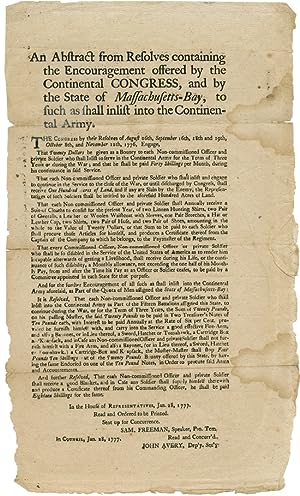 AN ABSTRACT FROM RESOLVES CONTAINING THE ENCOURAGEMENT OFFERED BY THE CONTINENTAL CONGRESS, AND BY THE STATE OF MASSACHUSETTS- BAY, TO SUCH AS SHALL INLIST INTO THE CONTINENTAL ARMY

Broadside, 13 3/4 x 8 1/4 inches. Docketed on verso. Expertly repaired separation along upper horizontal fold, short fold separation at left side of middle horizontal fold, moderate marginal dampstaining. About very good. Untrimmed. In a cloth chemise and half morocco and cloth slipcase, spine gilt. A rare recruitment broadside attempting to entice Massachusetts recruits into the Continental Army, printing the resolutions of the Continental Congress and the Massachusetts House in the months following the Declaration of Independence. The inducements offered by the Continental Congress include $20 in bounty, 100 acres of land, a new suit of clothes each year, and a half-pay disability pension if "disabled in the Service of the United States of America as to render him incapable afterwards of getting a Livelihood." The state offers an additional Ł20 if the new recruit arrives with "a good effective Fire-Arm, and also a Bayonet, or in Lieu thereof, a Sword, Hatchet or Tomahawk, a Cartridge Box and Knapsack." The Congress even offers a free blanket, or a reimbursement of eighteen shillings if the soldier brings his own. The broadside is signed in type by Samuel Freeman, the Speaker, Pro Tempore, and by John Avery, Deputy Secretary of the Massachusetts House of Representatives in Boston. "Very fine revolutionary broadside issued during the period when Washington had to beg for troops. Contains the four resolves of Congress, passed August 26th, September 16th, 18th, and 19th, October 8th, and November 12th, 1776, relative to the pay and bounty of officers and men in the Continental Army as part of the Fifteen battalions assigned to this state, to continue during the war, or for a term of Three Years" - Heartman. ESTC records just eight copies, including two each at the American Antiquarian Society and the Library of Congress. A rare, early, and important Revolutionary War recruitment broadside. EVANS 15418. FORD 2076. CUSHING 981. HEARTMAN P15:4. ESTC W34149. Seller Inventory # WRCAM54698

Title: AN ABSTRACT FROM RESOLVES CONTAINING THE ...