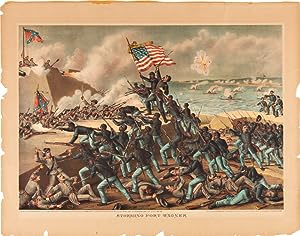 Association Member:
Quantity: 1
View all  copies of this book
Buy Used
Price: US$ 6,000.00 Convert Currency
Shipping: US$ 8.00 Within U.S.A.
Save on shipping

Color lithograph. Image size: 18 1/2 x 25 inches; sheet size: 22 x 28 1/4 inches. Matted to an overall size of 25 x 31 inches. Some moderate chipping and edge tears, not affecting image. Reinforced with older tape along top edge. Lightly toned, though colors are still strong and fresh. Good plus, with wide margins. Suitable for framing. A dramatic rendering of the first major battle in the Civil War to involve African- American troops, the attempted storming of a Confederate fort near Charleston, South Carolina on July 18, 1863. Colonel Robert Gould Shaw was killed along with fifteen other officers and nearly 300 of his men. The print shows the Union troops charging the ramparts of Fort Wagner, charging into the oncoming Confederate rifle and cannon fire. A Union officer, likely intended to be Shaw, stands atop the first rampart, sword held high, the flag waving boldly next to him. Union ships float off the coast in the background, shells bursting above them. Shaw (1837-63) came from a wealthy Massachusetts family noted for upholding reform and abolitionist causes. When the Civil War broke out in 1861, Shaw distinguished himself in combat, surviving the bloody battles of Antietam and Cedar Mountain. After the Emancipation Proclamation was passed in 1863, Massachusetts governor John Andrew organized the army's first black volunteer unit, the 54th Massachusetts. Despite his initial refusal, Shaw was ultimately persuaded by his family to accept the command. Sent to fight in the Union effort to seize the border islands of the Carolina coast in the late spring of 1863, the regiment proved its valor that summer by holding off Confederate troops at James Island, South Carolina. "Two days later [July 18, 1863], on Morris Island, Shaw proudly volunteered his regiment to lead the assault on the impregnable Fort Wagner, the first step in an offensive on the Confederate stronghold of Charleston, South Carolina. When the Fifty-fourth charged the fort, 272 were killed, wounded, or captured. One of those who fell was Shaw, leading his African- American troops in battle. Although the assault failed, the bravery of the Fifty- fourth proved the ability of black troops, and in death, the young Shaw was ennobled as a martyr to freedom and as a symbol of enlightened sacrifice" - ANB. The soldiers of the 54th impressed Shaw with their dedication and valor, which they demonstrated during the Fort Wagner assault. Shaw was buried with his troops by the Confederates in a mass grave on the site of the assault. Shaw and his troops are the subject of one of the most celebrated works of public sculpture in the United States, Augustus St.- Gaudens' Shaw Memorial, on the corner of the Boston Common nearest the State House. Shaw's leadership of the regiment is best known to many people today through the film GLORY (1989), which culminates in the attack on Fort Wagner and Shaw's death. A dramatic portrayal of this important historical moment. BLOCKSON 111. Seller Inventory # WRCAM52682