Items related to ILLUSTRATED BROADSIDE ADVERTISING A MEETING OF JAMES... 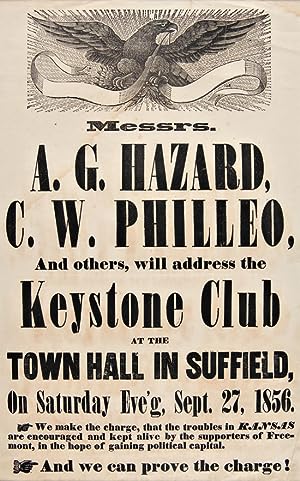 Broadside, 17 x 10 1/2 inches, visible area. Matted and framed. Light dampstaining at top edge, light foxing. Very good. An attractive broadside advertisement that promotes a meeting of James Buchanan supporters, the "Keystone Club," in Suffield, Connecticut on Sept. 27, 1856. The poster promises a number of speeches against the candidate of the newly-formed Republican Party, John C. Fremont, that assert the complicity of his supporters in the violence roiling Kansas. The key (and virulent) disagreement between the Democratic party, for whom Buchanan was the nominee, and the Republicans was over the Kansas-Nebraska Act and the issue of popular sovereignty, which would allow the residents of new states to vote on the existence of slavery within their borders. This broadside accuses anti-slavery and pro-Fremont partisans in Kansas of fomenting violence there for political gain. The text reads in full: "Messrs. A.G. Howard, C.W. Philleo, and others, will address the Keystone Club at the Town Hall in Suffield, on Saturday Eve'g, Sept. 27, 1856. We make the charge, that the troubles in Kansas are encouraged and kept alive by the supporters of Freemont [sic], in the hope of gaining political capital. And we can prove the charge!" The text is headed by an American eagle gripping arrows and olive branch, in the style of the Great Seal. OCLC records only two copies of this interesting broadside, at the Connecticut Historical Society and Connecticut State Library. Seller Inventory # WRCAM53064