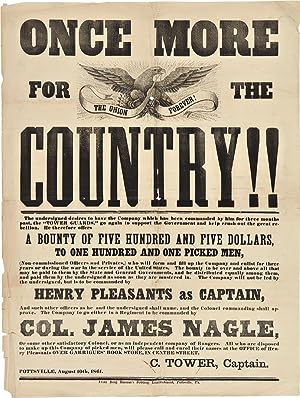 ONCE MORE FOR THE COUNTRY!! [caption title]

Broadside, approximately 24 x 18 inches. Minor separations at crossfolds, some edge wear and short closed tears at edges, somewhat toned. Good. Framed. A rare Civil War recruitment broadside, calling for troops to join the Tower Guards in Pennsylvania during the first year of the conflict. The broadside is illustrated with a large, open-winged eagle holding a banner in his beak which reads: "The Union Forever!" The body of the broadside reads, in part: "The undersigned desires to have the Company which has been commanded by him for three months past, the 'Tower Guards,' go again to support the Government and help crush out the great rebellion. He therefore offers A bounty of five hundred and five dollars, to one hundred and one picked men." The text explains that the company will be commanded by Henry Pleasants as captain, and will be part of a Regiment commanded by Col. James Nagle "Or some other satisfactory Colonel, or as an independent company of Rangers." The broadside directs any interested men to call and enroll their names at the Office of Henry Pleasants. Signed in type by "C. Tower, Captain." Charlemagne Tower organized a company of Union soldiers from Pottsville in a three-month enlistment during the Civil War. Before the war Tower worked in law, specifically moving to Schuylkill County to get involved in claims to large coal and mineral deposits there. Tower was able to build wealth and prominence for himself in the area through his work in land dispute cases, most prominently the Munson-Williams case. When the Civil War began at Fort Sumter, Tower took notice. Within ten days of that first conflict on April 12, 1861, Tower had recruited around 270 men from his county to join the Union Army under a three-month enlistment provision. Tower's unit, who became known as the "Tower Guards," entered the Union Army as Company H of the 6th Pennsylvania Regiment, part of a brigade commanded by Maj. Gen. Robert Patterson. Tower, commissioned captain of his unit, provided uniforms and arms for his men at his own expense. The unit saw action most famously in the engagement at Falling Waters in July of 1861, a Union victory in name, but with its own failings that led to the defeat at the First Battle of Bull Run. It would seem that Tower's efforts were not exhausted on this first unit, because the featured broadside is dated just after his unit mustered out of service, and asks for more men to take up the cause and fight for the Union. It would seem that Tower himself funded the bounty offered in the broadside, but this is not certain because much less is known about this second attempt to recruit men for the Union Army. After his service in the war, Tower was later named U.S. Provost Marshal for Pennsylvania's 10th Congressional District from 1863-64, and continued working at his Pottsville practice until moving to Philadelphia in 1875. A master land negotiator, Tower held property in North Dakota and Minnesota that would help develop those states and the United States as a whole. His holdings in North Dakota became Tower City, a promising town arranged and planned by George Ellisbury in 1879. Tower's land in the Vermilion Range in Minnesota proved to be rich with iron ore, necessitating a mine and a direct railroad line, both of which contributed to the local, state, and inter-state economies. Though Tower died on July 25, 1889, his legacy was carried on by the towns across state lines that were named after him, his son who became the minister to Austria- Hungary under President William McKinley, and the unit of "Tower Guards" who fought for the Union Cause in the Civil War. A visually-striking artifact from the early period of the Civil War, with no copies recorded in OCLC. Seller Inventory # WRCAM54027

Title: ONCE MORE FOR THE COUNTRY!! [caption title]