Items related to THE STATE OF SOUTH CAROLINA. AT A CONVENTION OF THE...

Home Civil War]: [South Carolina] THE STATE OF SOUTH CAROLINA. AT A CONVENTION OF THE PEOPLE OF ... 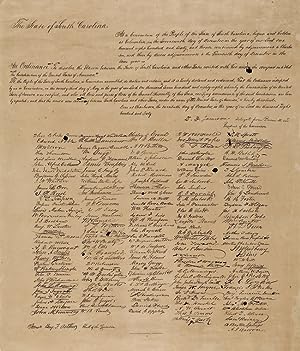 Lithographic broadside, 33 3/4 x 26 1/2 inches. Mild creasing, toning, and spotting. Very minor repaired marginal tears, small chip in lower left corner. Near fine. Matted and framed. The very rare lithographic facsimile of the South Carolina Act of Secession, which precipitated the beginning of the Civil War and is thus one of the earliest Confederate imprints. One of only 200 copies printed, this copy was found among the papers of William Dunlap Simpson, a prominent South Carolina legislator and governor. Simpson was a lawyer who served two terms in the South Carolina House of Representatives and one in the state Senate. He acted as a lieutenant colonel during the Civil War and was a delegate to the Confederate State House in 1863. After the Civil War, Simpson was elected lieutenant governor, then governor for a brief time before serving ten years as chief justice of the South Carolina Supreme Court. This large format, contemporary engraving of the original engrossed and signed manuscript document presents the Act of Secession as it was passed and signed in the South Carolina State House. It was so faithfully executed that it also reproduces the ink blots present on the original document. The document features the text of the secession ordinance and the signatures of D.F. Jamison, president of the Convention, and 169 delegates to the Secession Convention called by Gov. Francis W. Pickens. The historic resolution, which revoked South Carolina's ratification of the United States Constitution, was largely the work of Robert Barnwell Rhett, editor of the CHARLESTON MERCURY, which printed a well-known secession broadside of its own, proclaiming: "The Union Is Dissolved!" The secession resolution was passed unanimously at 1:15 p.m. on December 20, after which Jamison said, "The Ordinance of Secession has been signed and ratified, and I proclaim the State of South Carolina an Independent Commonwealth." Shortly after passage of the ordinance Evans & Cogswell, printers to the convention, were asked to prepare a copy for use by the members. The convention reconvened in March 1861 to address issues related to the coming war. According to the report of Paul Quattlebaum, Chairman of the Committee on Printing, published as an appendix to the March 28, 1861 entry in the JOURNAL OF THE CONVENTION OF THE PEOPLE OF SOUTH CAROLINA, the printing was "in a style creditable to the art; and by a careful comparison with the original, the Committee find it to bear a very notable similarity to it." The convention delegates immediately authorized Evans & Cogswell to print 200 lithographic copies of the Ordinance, to be distributed at the direction of D.F. Jamison. Evans & Cogswell likely printed the 200 copies, including the present copy, in the days that followed, and probably before the Battle of Fort Sumter on April 12. The copies were then most likely distributed to the convention delegates and other prominent state officials, such as William Dunlap Simpson. An exceedingly rare and important Civil War document, once belonging to a South Carolina governor and Civil War officer, with only eleven copies known in institutions, according to Parrish & Willingham, and even fewer in auction records. PARRISH & WILLINGHAM 3794. CRANDALL 1887. SABIN 87444. JOURNAL OF THE CONVENTION OF THE PEOPLE OF SOUTH CAROLINA, pp.204, 543. Seller Inventory # WRCAM52380

Title: THE STATE OF SOUTH CAROLINA. AT A CONVENTION...