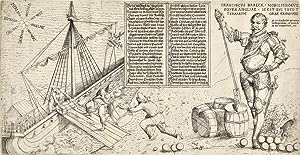 Etched illustrated broadside on two joined sheets, approximately 11 1/2 x 22 1/2 inches. Minor wear at lower left and upper right corners. Small rust spot in the text. Near fine. Framed, glazed, and matted. A very rare portrait of Sir Francis Drake on a German broadside, celebrating his circumnavigation of the world and thus most likely published after 1580. It is one of the very few lifetime portraits of Drake and is a marvelous representation. Drake is shown full-length, in armor, holding a firearm, standing at a port, also illustrating three men loading a ship, with two columns of German poetry in the center. Another copy of this broadside is in the John Carter Brown Library, a gift of Henry C. Taylor in 1944. The two columns of German poetry in the center refer to Drake's recent return from his voyage and invoke the image in the broadside of him loading his ship with powder to fight the enemies of Christendom. It then warns soldiers not to act as mercenaries for non-Christians. As Drake never fought the Turks nor any non-Christian government, it seems likely that the author of this broadside sought to exploit Drake's fame as a privateer and successful military leader for Queen Elizabeth, as a model for Germans to serve Christendom in the war against the Turks. Andresen ascribes the etching to Balthasar Jenichen (fl. 1563-92, died before 1621), a prolific artist of Nuremberg. Drugulin describes a copy with that artist's name inscribed in the plate, "B. Jenichen fec."; and a copy of the unsigned state appeared in Ludwig Rosenthal catalogue 85 in 1892 as item 427, from which it was sold to the Germanisches Nationalmuseum. Rosenthal assigned to the etching a date of circa 1568, which seems impossible given the inscription. Our copy is the state without the artist's name, as is the copy at the John Carter Brown Library. The most extensive discussion of Drake portraiture, in Wagner, does not mention this example. None of the examples reproduced there, painted or engraved, show the same treatment of the face, though the pose and type of armor are reminiscent of the famous "Hondius" portrait. In his discussion of the John Carter Brown acquisition, Lawrence Wroth notes that a copy of the portrait alone is noted in the Gardiner Greene Hubbard collection in the Library of Congress. He also notes that from that copy the portrait was reproduced by John Fiske in his BEGINNINGS OF NEW ENGLAND (1898), the only instance of its use known to Wroth. It is not listed in O'Donaghue's CATALOGUE OF ENGRAVED ENGLISH PORTRAITURE IN THE BRITISH MUSEUM. A fine copy of an extraordinary illustrated broadside, of the greatest interest for the early history of world travel and exploration. JCB, MARITIME HISTORY: A PRELIMINARY HANDLIST (1979) 1103 (dated 1588 by conjecture of L. Wroth). JCB, REPORT 1943/44, pp.23-27. WAGNER, SIR FRANCIS DRAKE'S VOYAGE AROUND THE WORLD (1926), p.509, note 62. W. DRUGULIN, HISTORISCHER BILDERATLAS.ZWEITER THEIL (1867) 558. ANDRESEN, DEUTSCHE PEINTRE-GRAVEUR II:58. HOLLSTEIN XVB 162. Seller Inventory # WRCAM48390