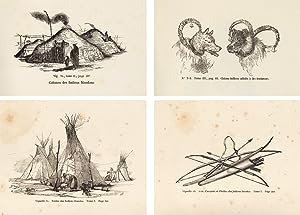 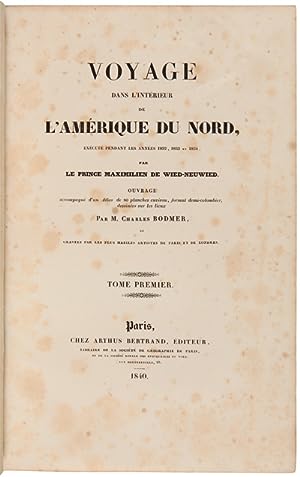 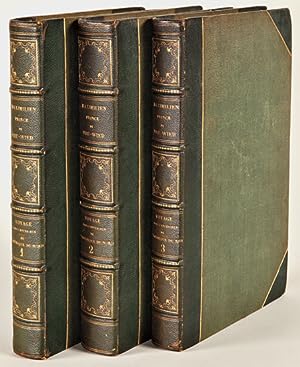 Three volumes. [4],383; [4],487; [4],410pp., plus sixty engravings on thirty plates, and a map of Fort Clark. Lacks the folding map. Half title in each volume. Contemporary three- quarter green morocco and cloth, gilt. Minor wear to extremities. Scattered foxing, moderately heavy at times. Very good. First French edition of this most important work of Western Americana, describing the travels of German Prince Maximilian of Wied in the United States and on the upper Missouri River in 1832-34, accompanied by Swiss artist Karl Bodmer. Prince Maximilian was already an experienced naturalist and explorer in 1832, having made an important scientific expedition to Brazil in 1815-17. His preparations for his trip to North America included retaining Karl Bodmer to prepare illustrations of the journey. Arriving in the fall of 1832, the Prince travelled across Pennsylvania and the Midwest and ascended the Missouri River in the spring of 1833. He went as far upstream as the American Fur Company post of Fort Mackenzie in present-day Montana, and spent the winter at Fort Clark, near the Mandan Indian villages. During this prolonged stay, he and Bodmer had ample opportunity to observe the Indian tribes of the upper Missouri in their full glory, carefully recorded by Bodmer in watercolors. In the spring of 1834 they returned to Europe, and devoted the next five years to preparing the text and plates for this publication. Often eclipsed by the famous Bodmer atlas of the expedition, Maximilian's text remains one of the most important western travel narratives of the fur trade era, and a rare book in its own right. WAGNER-CAMP 76:2. HOWES M443a. EBERSTADT 113:508. CLARK III:115. RADER 3652 (ref). PILLING, PROOF-SHEETS 2522. SABIN 47015. Seller Inventory # WRCAM47235