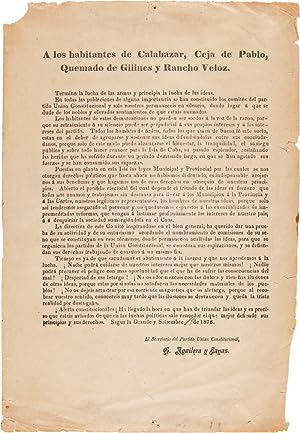 Broadside, 12 1/2 x 8 3/4 inches. Chip at upper left corner, not affecting text. Small tears in all edges, several repaired by tape on verso. Good. A rare and fascinating Cuban political broadside calling for an end to armed struggle but a beginning to a "struggle for ideas" at the conclusion of Cuba's "Ten Years' War," the battle for independence from Spain in 1868 to 1878. The broadside is addressed to the residents of the region around the north-central coast of Cuba, some 150 miles east of Havana. The text of the broadside is signed in print by Gabriel Aguilera y Zayas, Secretary of the Partido Union Constitucional (PUC), one of the two main political parties that developed out of the Ten Years' War. The PUC, which was a conservative pro-Spanish party led by prominent Creoles, sought a measure of local political autonomy while favoring continued Spanish control over Cuba. The text exhorts Cubans to partake in the ideological struggle that would succeed the armed rebellion, and urges them not to fall into lethargy, but to continue the battle of ideas against radicals seeking independence from Spanish colonial rule. Due to their ephemeral nature as well as the climate of the Caribbean, any such Cuban broadsides are scarce. No copies of this broadside are located in OCLC. Important evidence of the political factionalism and the strength of pro-Spanish sentiment in Cuba in the late 19th century. Rare, and possibly unique. Seller Inventory # WRCAM38237