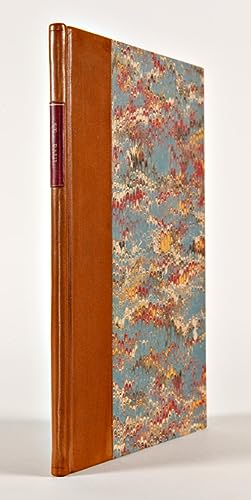 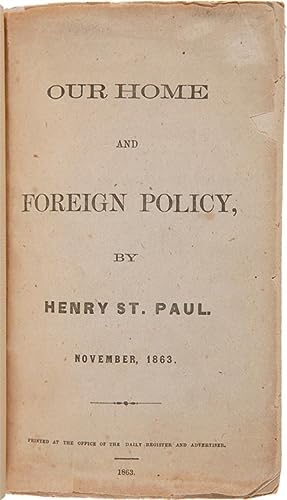 Published by Printed at the Office of the Daily Register and Advertiser, [Mobile, Al.], 1863
Save for Later
From William Reese Company - Americana (New Haven, CT, U.S.A.)

23pp. Antique-style half calf and marbled boards, leather label. Toned. Small closed tear in fore-edge of titlepage. Minor chipping at extremities of a few leaves. Good plus. A forceful (and ultimately fanciful) statement of Confederate foreign policy aims more than two years into the Civil War. "Dream of an Imperial Confederacy" - Howes. Born in Belgium to French parents, Henry St. Paul fought for the South and was brevetted a colonel on the battlefield at Seven Pines. In this tract, which seems to be rather scarce in the market, he lambastes Northern pretensions to moral superiority, and dispels the "King Cotton" theory, asserting that it was never inevitable that cotton-dependant England would side with the South. Rather, he looks forward to a Confederate alliance with France, which would not be duped into the "sickly sentimentalism of negro worship." St. Paul urges Confederate statesmen to practice a vigorous diplomacy, and predicts the CSA and France working together could turn the Gulf of Mexico into a "French and Confederate lake," and that they could control Central America as well. HOWES S39, "aa." PARRISH & WILLINGHAM 5832. SABIN 75451. Seller Inventory # WRCAM47724

Publisher: Printed at the Office of the Daily Register and Advertiser, [Mobile, Al.]