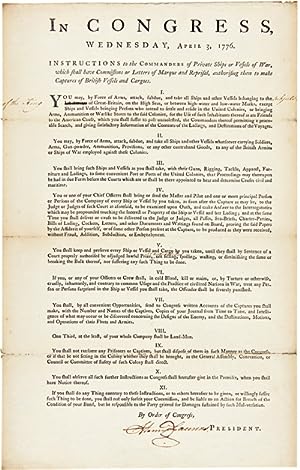 IN CONGRESS, WEDNESDAY, APRIL 3, 1776. INSTRUCTIONS TO THE COMMANDERS OF PRIVATE SHIPS OR VESSELS OF WAR, WHICH SHALL HAVE COMMISSIONS OR LETTERS OF MARQUE AND REPRISAL, AUTHORISING THEM TO MAKE CAPTURES OF BRITISH VESSELS AND CARGOES [caption title]

Broadside, 13 1/2 x 8 1/2 inches. Old fold lines. Wear at some folds, one repaired on verso with tissue. Contemporary manuscript notations in text, signed by Henry Laurens. Very good. The printed instructions issued by the Continental Congress to privateers during the American Revolution, in this case under the signature of Henry Laurens as President of Congress. The text of the broadside elaborates eleven articles of instruction for American privateers, private vessels authorized to raid enemy commerce during wartime. These vessels far outnumbered ships of the fledgling American navy and had a huge effect on the outcome of the war, accounting for the capture of hundreds of British ships and millions of dollars in prize money. In addition to allowing the taking of ships by force of arms, the articles prohibit torture and murder, and indicate that Congress shall dictate disposal of prisoners. The privateering proclamation was first issued in April 1776 with John Hancock's name printed as President of Congress. This was followed by another issue, which Hancock signed in manuscript. Subsequently the broadside was issued by other presidents of Congress. South Carolinian Henry Laurens succeeded Hancock as president in November 1777, while the Congress was in York, Pennsylvania, and served through December of the following year. The present broadside, with Laurens' signature, was probably issued in the latter part of 1778, after the American forces had reclaimed Philadelphia from British occupation. John Jay followed Laurens as president, and two issues of the broadside exist with his manuscript signature, dated in 1779. The ESTC notes the four Hancock and Jay issues, and the differences in type settings among them, but the present Laurens issue is unrecorded. It is likely that the broadside was part of the paperwork issued to American privateers to demonstrate that they were authorized by Congress and not simply pirates. This may be why the different issues were actually signed by the President of Congress, in order to demonstrate the validity of the privateers' actions. In this regard, interestingly, Laurens has also made two manuscript corrections to the text, changing the phrase "Inhabitants of Great Britain" to "Subjects of the King of Great Britain" in Article I: "You may, by force of arms, attack, subdue, and take all ships and other vessels belonging to the [subjects of the King] of Great Britain, on the High Seas, or between high water and low water marks."; and inserting the additional condition "or acquitted" in Article V: "You shall keep and preserve every ship or vessel and cargo by you taken, until they shall by sentence of a court properly authorised be adjudged lawful Prize [or acquitted], not selling, spoiling, wasting, or diminishing the same or breaking the bulk thereof, nor suffering any such things to be done." The only known copy of an important broadside, with the signature and corrections of Henry Laurens, illuminating a vital part of the American military effort in the Revolution. EVANS 15137 (Hancock issue). Seller Inventory # WRCAM46251