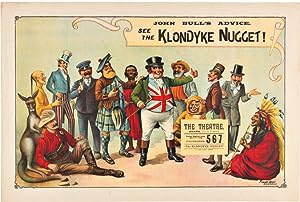 Chromolithographic poster, 20 x 30 inches. Minor soiling and wear, a few small closed tears in the margin. Flyer for local theatre pasted to right side of sheet (in image). Very good. A rare poster for the popular stage play, THE KLONDYKE NUGGET, written and performed by S.F. Cody throughout the British Isles at the end of the 19th century. Samuel Franklin Cody (1867-1913) was a unique figure in late Victorian Anglo-American popular entertainment. Born Samuel Franklin Cowdery, he later changed his surname to capitalize on the fame of Buffalo Bill Cody, even mimicking Buffalo Bill's clothing and facial hair style. Born in Texas, S.F. Cody trained in the Forepaugh Wild West Show, and found much of his fame in England. He is renowned in the history of aviation as the first man to conduct a powered flight in England, and he later developed large kites that were used for artillery spotting during World War I. Cody's life was filled with tall tales (though some of them are perhaps true), including his claim that he prospected for gold in Dawson City during the Klondike Gold Rush. That story set the groundwork for the theatrical play advertised herein, where Cody plays the role of George Exelby; Lela Cody, his (common law) second wife, the part of Rosie; and her son, Edward LeRoy, plays Joe Smith. This poster shows a portly British gent in a Union Jack waistcoat centered in the sheet, endorsing the play by giving a thumbs up. He is surrounded by a varied cast of characters from all nations and ethnicities - a Native American, an Eskimo, an African tribesman, a Scotsman, Uncle Sam, a Chinaman, and an Aussie with a Kangaroo, among others. An ad for "The Theatre, Neath. Near G.W. Station" is pasted to the right side of the sheet, indicating that the play runs three nights only, December 5, 6, and 7. Seller Inventory # WRCAM48016